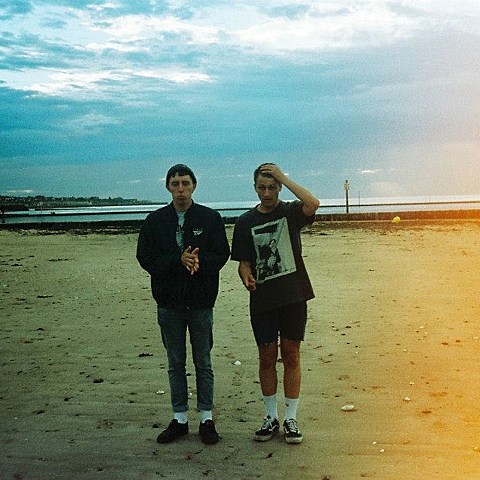 When I was recently discussing emo bands, I only mentioned North American bands, but there of course emo bands in other countries, like the UK. Granted, most British emo bands sound like American bands, but there have been some great ones, like Plaids, Crash of Rhinos, and the most recent one to grace my ears, guitar/drum duo Nai Harvest. These guys released a solid album earlier this year, Whatever, which does the mathy, shouty, Midwest thing pretty well, and they've now teamed up with the trusty Topshelf Records (and Dog Knights) to release their new EP, Hold Open My Head, on March 3. They released the title track this week, which calms down the post-hardcore tendencies of Whatever and veers more towards emo's indie rock side. You can stream that track, along with a full stream of Whatever, below. The band's only dates at the moment are a European tour with Gnarwolves, and those dates are listed below too.

In other Topshelf news, Florida's You Blew It! recently announced that they'll release their sophomore LP, Keep Doing What You're Doing, for the label on January 14. The first single from that album, "Award Of The Year Award," is also indebted to the mathy, shouty Midwest sound and you can stream that below. The record was produced by Evan Weiss (Into It. Over It., Their/They're/There, etc). As discussed, You Blew It! are going on a tour with The Front Bottoms, which doesn't hit NYC but does hit Long Island on January 30 at 89 North (tickets). The Front Bottoms also play two sold-out NYC shows, including a BV holiday show. All You Blew It! dates are listed below.

Speaking of Evan Weiss and Topshelf, we just mentioned that Topshelf bands The World Is A Beautiful Place & I Am No Longer Afraid to Die and A Great Big Pile of Leaves were added to the Into It. Over It. tour. Their/They're/There tours with Birthmark even sooner.

Nai Harvest and You Blew It! streams, along with the lists of dates, below...

You Blew It! - "Award Of The Year Award"