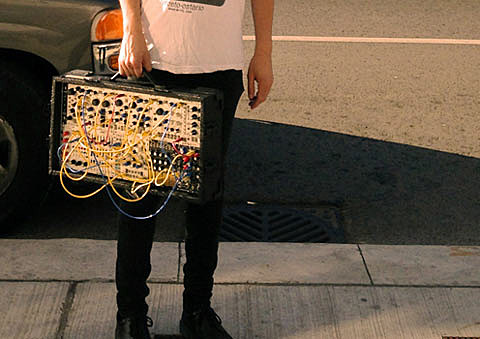 Toronto musician Josh Korody is a busy guy. He plays in bands Beliefs and WISH but has also been working on a solo project called Nailbiter whose debut album, Formats, is out Friday (9/25) via Hand Drawn Dracula. Taking inspiration from late-'80s/early-'90s industrial (and maybe a little DJ Shadow), Nailbiter is more about dark forboding atmosphere than song structure or hooks. And on that level it totally works, and would make an excellent soundtrack to a gruesome Halloween haunted house, next nightmare, horror film, etc. You can check out the whole album, which premieres in this post, below.

Nailbiter and Beliefs will bothl be playing NYC during CMJ. Beliefs play the Hand Drawn Dracula/Bella Union showcase at Palisades on October 14 with Landshapes, Doomsquad and Vallens. Tickets to that show will be available soon. Beliefs and Nailbiter will both play an unofficial show at Alphaville on October 15 with Ringo Deathstar, Dead Leaf Echo, Lazyeyes, and Vallens. That show is $10 at the door.

All Nailbiter and Beliefs tour dates are listed below.