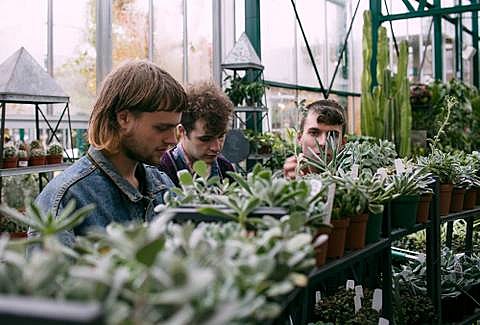 Olympia, WA trio Naomi Punk, who recently signed to Captured Tracks and rereleased their debut, The Feeling, on the label in October digitally and on CD (it's out 11/20 on vinyl), will be playing some shows in November leading up to the vinyl release of their album. Two of those shows happen in NYC on November 16 at 285 Kent with G Green, Parquet Courts, and Psychic Blood; and November 17 at Cake Shop with Habibi, The Mallard, and Noons. All Naomi Punk dates are listed below.

For Brooklyn's Habibi and San Francisco's The Mallard, the Cake Shop show is part of a November tour they'll be on together which also hits Death by Audio on November 18. All dates on this tour are listed below.

As for Parquet Courts, they just wrapped up a bunch of NYC shows in October, and this 285 Kent show appears to be their only upcoming scheduled date at the moment. If you're headed to that show, it's worth getting there early to catch their set.

Lists of all dates, some song streams and videos are below.

Mansion from Hannah Lew on Vimeo.