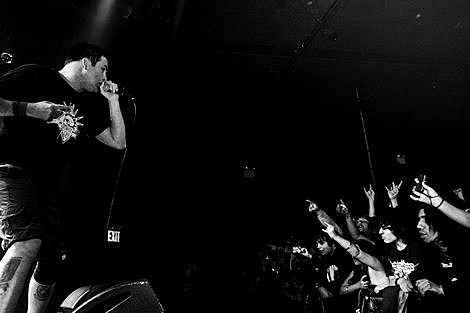 Mark "Barney" Greenway and his co-conspirators in Napalm Death are back with Utilitarian, their new Century Media-released LP due on Feb 27th in the EU and Feb 28th in the US. We recently dropped a new track from the grindcore pioneers and now have cornered their long-time frontman for a short interrogation on the new record, their plans for the immediate and longer-term future, and what it means to be punk in the 21st century. The results of said discussion are below. 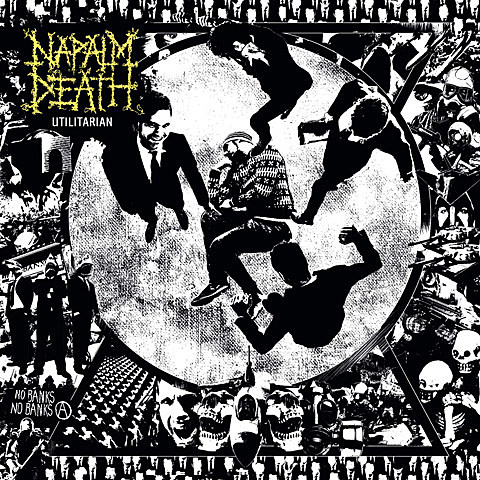 Utilitarian is the fifteenth Napalm Death LP, and 2011 marked the band's 30th year in existence. Is the title Utilitarian related to the band's longevity and ability to stay afloat in music for so long? Or would you attribute it to a DIY punk attitude?

Neither, really. When I write lyrics, I like to (hopefully) avoid generic expressions and try to write creatively using associative wordplay and suchlike. To that end, Utilitarianism is a philosophical concept with many different interpretations, with one of those being that "good" actions make for "good" consequences. And for the purposes of our album title, I wanted to draw a parallel with that and "ethical" living where you don't undertake a specific action or activity if you suspect that it will clearly impact negatively on somebody else somewhere down the line.
However, within that, seeing that the object of living that way is to make a difference in some way, when you don't see instant results on that front, you tend to doubt at times whether persevering is worth it and whether you should just live your life without self-restriction.
The conclusion is that you should persevere with such ethical considerations because results can often be gradual rather than instantaneous, and if the world were to move along without this certain aspect of low-level resistance, it would give the exploitative power mechanisms an even freer rein to act as they wish. 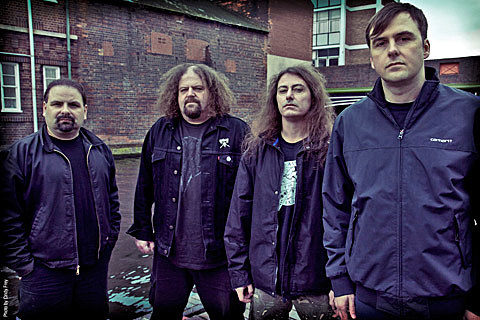 Are there plans to tour surrounding your appearance at Maryland Deathfest? Or will this be a one-off appearance?

It's a one-off for now. We do plan to do more of an extended tour at some point in the coming year, but we need to give serious thought to a band bill that will excite people and of course come with a fair ticket price. I've heard that club tours in the US are struggling a little at the moment, so it's doubly important that we get it right for both band and gig-goers.

Do you foresee the band celebrating its 40th? And if so, where do you see Napalm Death going in that time?

It's certainly possible when you consider that we've made it this far already - never say never and all that. If we do notch up another ten years, we'll probably be looking to trail-blaze more countries around the world where bands have just never bothered to go. That is one thing that definitely keeps things fresh and unpredictable.

In the US Napalm Death is definitely the type of band that plays to larger stages, mostly ones with barriers and the associated security. Obviously there are perks to playing on a stage like that (no broken equipment, you can concentrate on delivering the best performance without interruption) but do you ever miss playing in cramped-no-stage-or-security DIY spaces? The danger associated with it?

Hmm, that's not entirely accurate. If anything, I would say that most clubs we play in the US are without barriers and security (DIY is kind of a subjective term). That was certainly the case with the last tour and, as far as I can remember, beyond that.
I love playing all kinds of gigs, but we definitely fare best with intimate settings. That said, we'll give it 100% in any situation - I have the deformed fingers (from breaking them onstage) to prove it! Indoors at least, I don't always feel fulfilled when there is a barrier and a gulf between us and the crowd, even though, as I said, we'll still make sure that Napalm projects itself as spontaneously it needs to.

You have long been a champion for young bands, like recently shouting out the great Parliamenterisk Sodomi on your twitter and pushing for Trap Them to head on the road with you on your US tour in 2009. Who are you currently impressed with? Grindcore, punk or otherwise.

Yeah, it must be special when I comment in that way, as I rarely bother with inanely twittering (ha ha). I really love the 'Ugly Animals' album by Retox. It's not turning the grindcore genre on its head by any means, but it has those very simple key ingredients - great songs and off-the-rails fury and vitality. Other than that, at the moment still loving Russian Circles. I just love the overall ambience of that band. 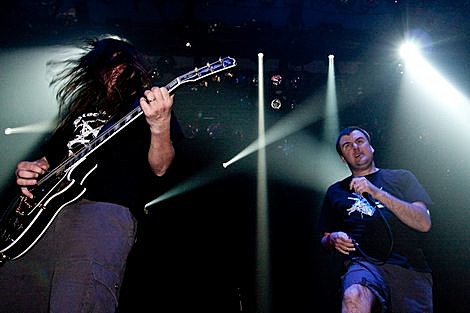 The greats are constantly hungry for knowledge, whether that is political, musical, or otherwise... constantly looking to improve as a musician and a person. As someone who has arguably seen it all in the extreme music game, do you feel like you are still learning? What is an example of a lesson that you have learned in between Time Waits for No Slave and Utilitarian?

We wouldn't see ourselves as greats - and that's probably another reason why we've been around so long. It helps to not believe your own hype. Keeps you on your toes.
But yes, of course, I'm still picking things up as I go along. It would be arrogant to suggest otherwise, I think. If anything else can give me greater understanding at any level in life it's kind of useful, so I'm always keen to find those things out.
One thing I have learned on a musical level since the last album is that if you get a feeling that a particular idea might not work, try it out first because you could surprise yourself. In the past, I would admit that I've been quite quick to ditch seemingly bad ideas
For 'Utilitarian', I tried to mix in some of the 'left-field' vocal influences (inspired by bands such as Swans, Birthday Party, My Bloody Valentine) into the faster parts this time as opposed to just keeping them for the slower, more ambient musical side of Napalm Death. I wasn't sure it would fit at first because the slower parts always seemed like the natural home for that stuff. But it certainly does seem to fit and it gives a really different flavour to the new album.

I'm not sure to be honest, and I'm reluctant to simply stick with the same old cultural labels ad infinitum. Which is not to be entirely dismissive, but just to say for me that the biggest thing is to think and do for yourself and live and die by your own decisions - whether you put the punk label on it or not. Of course, as a band, we work with other people / companies within that framework, but we still are insistent on having control or being able to veto stuff that we feel is just not right.
Another thing is that I'm kind of over the 'uniform' aspects to it - it's not essential to have liberty spikes or a Discharge patch on your jacket. If that's your thing at this point, go for it, but it doesn't give you any more significance than everybody else. I think some people lose their grip on that sometimes. Punk can sometimes unfortunately be as elitist as many other 'sub-cultures' in that regard - in the desire to be more 'true' than others.

Shane with Venomous Concept at Europa (more by BBG) 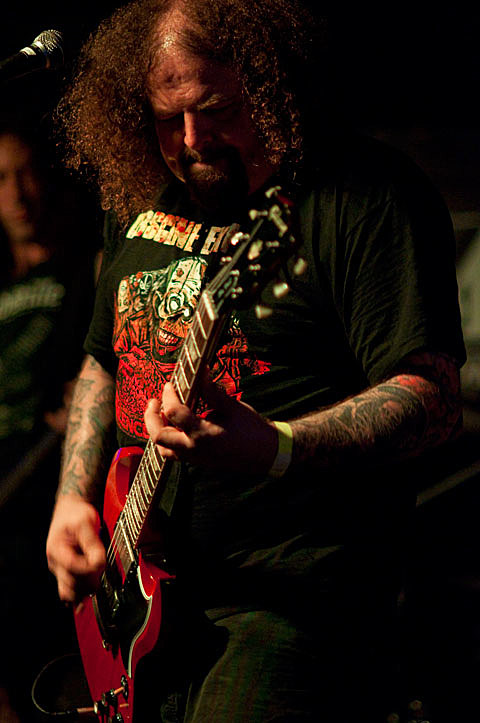 Final question...Shane Embury is currently gearing up for a tour with Lock-Up, but recently played shows with Venomous Concept and Brujeria. What is your current favorite Shane-project if asked to choose only one?

Thanks to Barney Greenway!