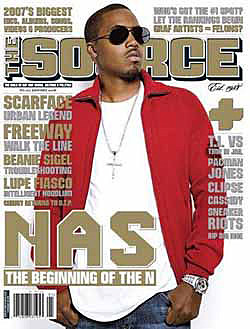 Tickets are on sale for a December 26th NAS show at Hammerstein Ballroom in NYC. "Nigger" - originally supposed to be out before Christmas, will be released in February.....

"It's about the attacks that have happened to blacks, whites, all ethnicities," he continued. " 'Mick' niggers, 'guinea' niggers, 'kike' niggers. I have a song called 'You a Nigger Too.' "

"It's all over the place," he added. "Balance is so important because there's a fun level to the [album] too. There's an attractive, sexy, aspect to it; a stylish aspect, a flashy aspect. It takes negatives and makes them good."

"I have a song called 'The Fear,' " he said. "The full title of the record is 'The Fear of the Black Man's D---.' That's some sh-- you can get comedy [from], or you can get some seriousness from it when you talk about the barbaric castrations that happened in our past — which is very serious, nothing to laugh at." [MTV]