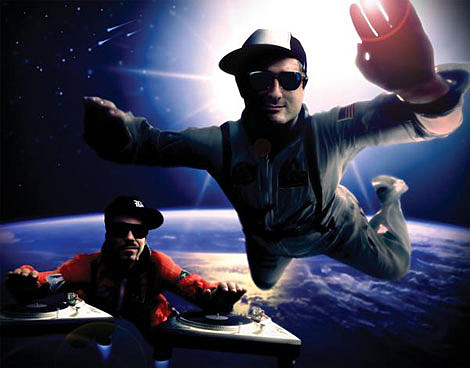 N.A.S.A., and their worldwide debut The Spirit of Apllo, is an ongoing creative collaboration between two lifelong music aficionados, Squeak E. Clean and DJ Zegon, and their friends, friends of friends and musical heroes.

While N.A.S.A. stands for North America/South America and contains a number of superstar artists from both coasts of the U.S., it is about as far from a tension-building geographical showdown as a record can get. Rather, The Spirit of Apollo was born with the righteous goal of bringing people together through music and art, and that is exactly what masterminds Sam Spiegel (Squeak E. Clean) and Ze Gonzales (DJ Zegon) have done.

Unexpected collaborations abound on the seventeen track release. Tom Waits growls over Kool Keith, Karen O taunts while Ol' Dirty Bastard gives shoutouts to Wu Tang and N.A.S.A from the grave, and David Byrne, Chuck D and others expound on the evils of "Money." In spite of the range of performers, the pairings seem organic, inspired and make perfect sense on the first listen, never coming off as ironic or impulsive.... [RCRD LBL]

Other N.A.S.A. collbaroators included Lykke Li, Santogold and Kanye West. Tickets are on sale for a March 12th show at (Le) Poisson Rouge in NYC. The date is part of a larger tour. Watch the David Byrne/Chuck D/Ras Congo/Seu Jorge/Z-Trip "Money" video, and see all dates, below...