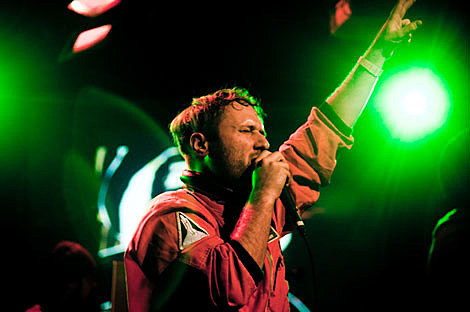 N.A.S.A.'s debut, The Spirit of Apollo, came out on Anti in February of this year. Odds are you've heard (or heard about) the many guest spots scored by the N.A.S.A. DJs, Squeak E. Clean and DJ Zegon. Those included David Byrne, Chuck D, M.I.A., Santigold, Nick Zinner, Kanye West, Lykke Li, members of the Wu Tang Clan and others.

This summer N.A.S.A. is bringing its live show back to NYC with a Bowery Ballroom show on Thursday, August 20th. Tickets go on American Express presale Wednesday, May 6th at noon. General sale starts Friday, May 8th at noon.

The band last visited NYC earlier this year with a pair of shows at (Le) Poisson Rouge. The first was a free record release show on January 29th, the second was a tour stop on March 12th en route to SXSW. Both featured the DJs and "scantily-clad, painted-green women, aliens and drunken, dancing fans (on the floor and on the stage)". The guys also played Coachella and their credits included a remixed for the Yeah Yeah Yeahs. A summary of the band's work is available through the streaming player on Squeak E. Clean's blog.

Videos from their Coachella set, with all tour dates below...