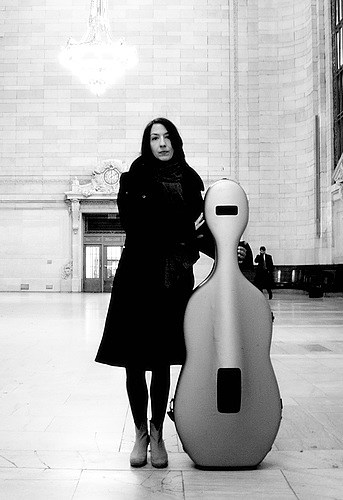 If you missed Dirty Projector Nat Baldwin last night, 1/29, at Union Pool in Brooklyn (where he played with Callers and Teen), you can also catch Nat on Thursday, 2/10, at Knitting Factory Brooklyn with In One Wind and Cuddle Magic.

Nat also has a show coming up in March. He, along with Elfin Saddle and Toronto's Picastro, will open for Julia Kent (ex-Rasputina, Antony & the Johnsons) at a cello-heavy show at Littlefield on March 4th, four days before Julia releases her 2nd solo album, "Green & Grey," via Important Records who write...

"Using looped and layered cello, electronics, and recordings of natural sounds, she explores in this new instrumental record the melding of the technological and the organic, the patterns and repetitions that exist in nature and are mirrored in human creations, and the complexity and fragility of our relationships with one another and with the natural world. Without collaborators--other than the insect, weather, and wind sounds that create a sort of exoskeleton for the music--she has created an intensely personal landscape that references the way nature, however subverted and endangered by our modern world, still retains its power."

The tracklist and a few more tour dates below...