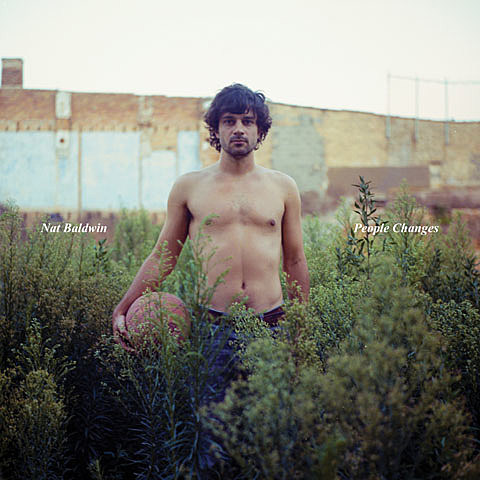 People Changes is Dirty Projectors bassist Nat Baldwin's new full-length due May 24th on Western Vinyl, and the 30-minute collection serves an ideal primer on his arco-bass style. An experimentalist at heart, Nat combines poppy falsetto melodies with outré improvisational tangents and interludes. On People Changes, the first and last songs, both covers, are the sweetest: Arthur Russell's "A Little Lost" (previously captured on a bootleg made last May at ISSUE Project Room) and Kurt Weisman's "Let My Spirit Rise." Between those, the middle five compositions catch Nat at a variety of points on the pop-experimental continuum. One of the best examples of how he walks that divide is "Weights," a gothic capsule whose refrain "on and on and on" feeds into its dizzing circular structure. Check it out above.

The record's cover (above) might tip you off to his other passion - basketball (though if you've seen the high-school b-ball trophy on the front of 2008 LP Most Valuable Player maybe you already guessed). It's appropriate that the video for "Weights," which we're premiering below (courtesy of Terroreyes.tv), captures a solo performance by Nat on a Brooklyn basketball court.

Baldwin is currently touring through the eastern half of the US, and he'll be in Brookyln for shows on May 7th and 8th, both at Zebulon.

All dates, and the video, are below...

Post tour, he joins his Dirty Projectors bandmates to cover the music of Black Flag as part of the May 22nd Our Band Could Be Your Life show.