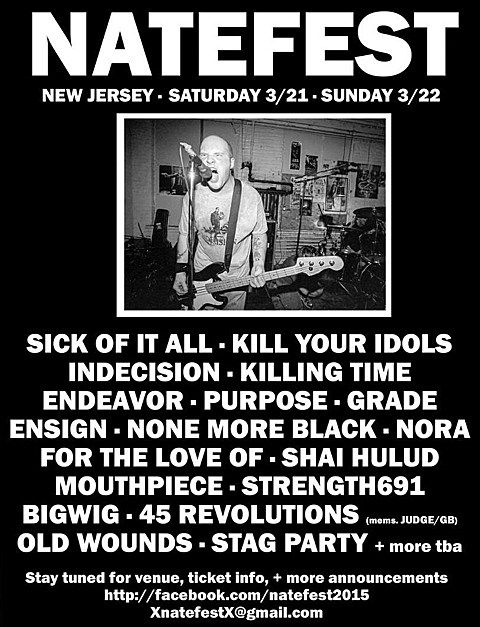 As previously mentioned, Nate Gluck of NJ hardcore mainstays Ensign is sadly battling cancer, and now Ensign have teamed up with a handful of other hardcore bands to put on NateFest in his honor, on March 21 & 22 at a TBA New Jersey venue.

The lineup includes long-running NYHC legends Sick of It All, as well as recently back-in-action NY veterans such as Kill Your Idols, Indecision, and Killing Time. There's also a handful of regrouped NJ vets including Endeavor, Mouthpiece, NORA, and two of Nate Gluck's other bands Strength 691 and For the Love Of.

There will also be a few long-running NJ bands who never went away like Ensign themselves, None More Black, Shai Hulud and Bigwig, reunited Canadians Grade (who just played with Ensign), and newer NJ bands Old Wounds and Stag Party.

There's a few other chances to catch some of the NateFest bands in the area too. Sick of It All play Black N' Blue Bowl in NYC, Shai Hulud play Coco66 (3/19) right before NateFest (tickets), and Indecision open for NJ vets E-Town Concrete in their home state on Valentine's Day at Starland Ballroom. That show is also with LI vets VOD, plus The Banner, Suburban Scum (also playing BNB Bowl) and Razorblade Handgrenade (tickets).

Check out a few videos of some of the bands playing NateFest below...

Endeavor at Court Tavern in 2009

None More Black at The Fest 7