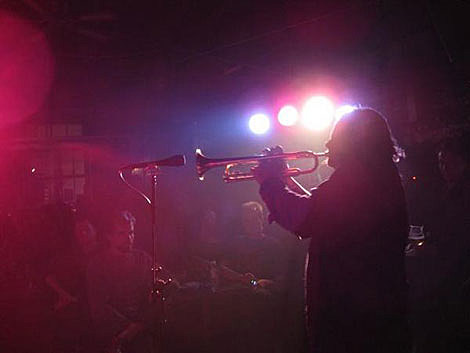 Nathan Bell has recorded with more than a dozen bands in the last decade. Most known for playing bass in Lungfish from 1996 to 2003, he has also worked with P.W. Long, Mighty Flashlight, and Television Hill, an earlier version of Arbouretum. Dave Heumann has also played with Cass McCombs, Bonnie "Prince" Billy, Anomoanon and Papa M, in addition to his work as leader of Arbouretum. [Thrill Jockey]

Brassa Bell (aka Nathan Osmodius Bell) is on tour with Brazil's M. Takara 3 (aka drummer Mauricio Takara). They play Zebulon in Brooklyn tonight (3/28) and then Cake Shop on Monday (3/29 with Invisible Circle). Each show will feature two sets. The first is Brassa Bell accompanied by Takara, and then the second is an M. Takara 3 headlining set. All dates below...