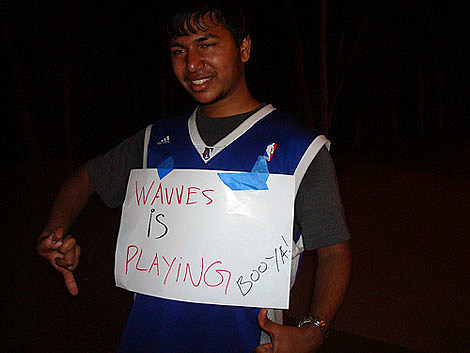 Pitchfork: Do you feel like you've been depicted unfairly?

Nathan Williams (WAVVES): I watched the video, and all I can talk about is what I've watched from the video because I don't really remember playing. So I can't really defend myself. I'm sure it was a disaster show, but I don't know. I don't really care. In the end, that sort of stuff is out of control. I did what I did, and people kind of love to watch you fall. I feel like that is part of it as well. But in the end, it's not so upsetting as it is crazy to me that it turned into such a huge deal. [In] this day and age where information and video can be transferred so quickly on the internet, people can write about it right away, and it all just happens so fast. People have instant access to it, so there's not escaping it.

Pitchfork: Did you ever consider doing Wavves as something where you just recorded and didn't play live?

NW: In the beginning, that's all it was. And everything happened so fast. Ryan came out to play drums a month before I started touring, or a month before we started touring. And then until the day of Barcelona, we were just touring nonstop. So we practiced for three weeks, me and Ryan, and then we went on tour nonstop, so there was never really any time for me to like transfer the songs from recordings to how they would pan out live. And I still haven't had the chance to do that. It was just kind of: "OK, this is how the songs go. Let's just go play them and have fun." And that's when it was the most fun. It just got kind of... I don't know what it got.

Tickets are still on sale for the show WAVVES has coming up at Bowery Ballroom. A new official video, along with some meltdown videos, below...

AND HERE IS THE NEW OFFICIAL VIDEO: