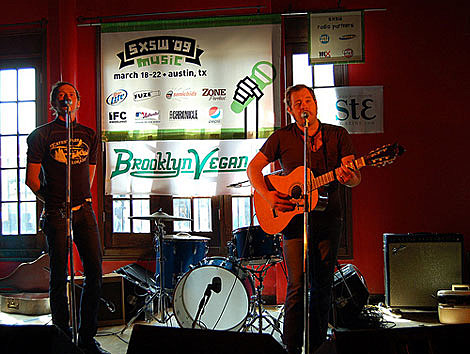 "Thirteen bands were scheduled to play the BrooklynVegan / Agency Group day party in Austin on Thursday, March 19, 2009. Twelve ended up playing - one of them twice. I think the story is that The Pains of Being Pure at Heart, who had a zillion other shows also scheduled during the SXSW week, got confused about what their set time was. For that reason (and traffic), they showed up too late to go on in their slot. Instead, The Wheel, who was our last-minute addition as opener on the inside stage, immediately went outside and played a second set on the larger outdoor stage in the late band's place. We got at least one "boo" when the "scheduling mixup" was announced, but what could we do? (sorry!) It was awesome of the Wheel to fill on a moment's notice. Hopefully the people outside enjoyed him after they got over the awkwardness. I didn't watch his second set, but he sounded amazing inside." [me]

By "he", I meant Nathaniel Rateliff whose official band name is now "Nathaniel Rateliff & The Wheel". The second Nathaniel left the stage (the first time) I ran up to him and asked if he would please play my CMJ show. He agreed, and now finally over six months later I'm happy to announce it that The Wheel will be appearing at the BV party at Music Hall of Williamsburg on October 20th (the show Fanfarlo are also playing).

On July 22nd of this year, The Wheel opened for Bon Iver (the opener of my CMJ show in 2007) in Nathaniel's hometown of Denver...

"Openers The Wheel were playing to a hometown crowd, but nonetheless got the loudest prolonged-cheer reception I have heard for any local band in a long time. Their intricate, melancholy songs are steeped in goodness and ready for a larger stage. The band is magnetically led by the wry, exceptional voice of frontman Nathaniel Rateliff (Born In The Flood) who in the oddest coincidence that you ever think could sound good, vocally evokes a young and impassioned Neil Diamond minus the glitter. The technicolor songs pack a punch, yet sounded timeless through a symphony of strings, aching harmonica and guitars, piano, intuitive drumming, and vocal harmonies that cut through the venue and held everyone's attention." [I Am Fuel You Are Friends]

If you don't make it to the October 20th Music Hall show, don't worry, it's CMJ. The Wheel (sometimes solo, and sometimes with a band) will be playing more than one show that week. One of those shows is October 23rd at Bowery Ballroom with Portugal. The Man, The Temper Trap, Drug Rug, and All The Day Holiday (tickets). Another one of those shows is a BrooklynVegan day party on Saturday, October 24th, at Pianos (many more details TBA on that one).

One MP3 is above. More songs at MySpace. Dates & videos below...