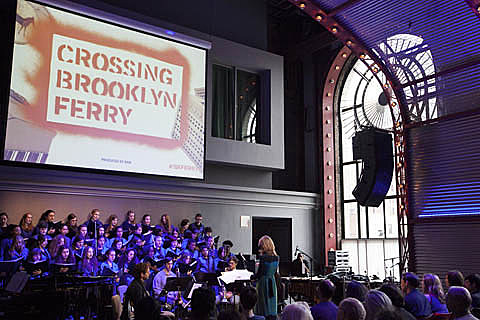 The inaugural Crossing Brooklyn Ferry festival that went down at BAM this past May and was curated by The National's Bryce and Aaron Dessner, was a success and they've decided to do it again in 2013. The 2013 festival will take place at BAM from April 25-27. The lineup has not been announced yet but stay tuned.

Another Dessner-related event happening in BAM's 2013 Winter/Spring season is Planetarium, "an evening of songs and instrumental works inspired by the solar system, by Bryce Dessner, Nico Muhly, and Sufjan Stevens." You may remember that Bryce, Nico, and Sufjan performed one of those pieces, "Venus," at the MusicNOW Festival this year. You can watch a video of that below.

All three shows are part of the just-announced 2013 Winter/Spring Season at BAM which includes 12 theater, dance, music, and opera engagements--from Jan 17 to Jun 9.

That Bryce Dessner, Nico Muhly, and Sufjan Stevens video is below