The Jungle Brothers at SOB's last night via MuphoricSounds 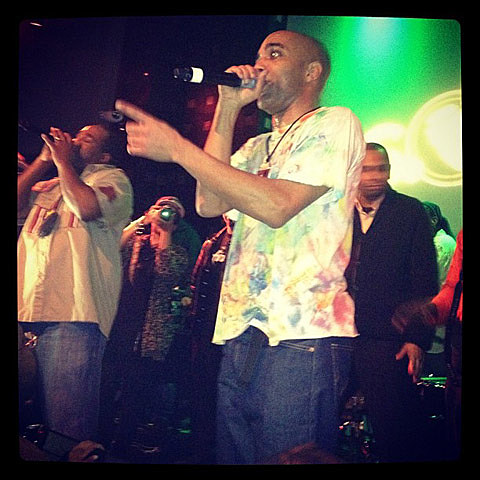 As expected, The Jungle Brothers DID bring out members of the Native Tongues (and others) last night at SOB's (2/7), but that did not include many of the "invited guests". The reunion and associated guest appearances were limited to Leaders of The New School (Charlie Brown & Dinco D, but sans the crucial Busta Rhymes), Jarobi (of a Tribe Called Quest), members of the UMC's and Black Sheep, Sadat X, Force MDs and possibly some others. Bum out, but it was sort of expected.

No word on whether members of A Tribe Called Quest will be in attendance at Harlem Stage in March either, but they will be the subject of a three day event:

On the heels of a major Producers Guild Award for the documentary Beats, Rhymes & Life: The Travels of A Tribe Called Quest -Harlem Stage, in conjunction with Revive Music, will celebrate the impact, importance and influence of the pioneering crew with A Tribe Called Quest: Innovation and Legacies - A Movement in Four Parts March 1-3 at Harlem Stage. This four part series features live performances, dance events and a free humanities event headlined by a panel of hip-hop scholars, journalists and artists.

"A Tribe Called Quest is one of the most important groups in the history of hip-hop, with a legacy that continues to impact generations of artists, musicians and audiences." says Simone Eccleston, Harlem Stage's Assistant Director of Programming, who curated the tribute. "With their signature sound, they created timeless gems, and this series seeks to celebrate their cultural significance, their musicianship and their roles as composers and producers. It is our goal to provide audiences with a multidimensional experience that highlights ATCQ's music, the historical context, and their influence on artists that have come after them."

In the span of three years, starting in 1990, A Tribe Called Quest - made up of rappers Q-Tip, Phife Dawg and Jarobi White, and DJ/producer Ali Shaheed Muhammad - released three albums - People's Instinctive Travels and the Paths of Rhythm, The Low End Theory and Midnight Marauders - widely acknowledged by hip-hop fans to be some of the best recordings ever. The crew became part of a larger community of artists making redemptive, transcendent music: groups like the Black Sheep, De La Soul, Jungle Brothers, and Leaders of the New School; solo performers Monie Love and Queen Latifah; and others who formed the collective Native Tongues. They made songs together and often referred to each other in recordings.

Tickets for A Tribe Called Quest: Innovation and Legacies - A Movement in Four Parts, range from free to $25 and are available by phone at (212) 281-9240, ext 19 or 20, and online at www.harlemstage.org. Free programs require RSVP at boxoffice@harlemstage.org.

More details on each event below.

In other hip hop news, head on over to Public Assembly TONIGHT (2/8) for a FREE show as part of the Red Bull Academy. Kicking off with a conversation with Buckshot (of Black Moon), Dru Ha (of Duck Down), and Skyzoo, the evening will also feature live performances from Smif-N-Wessun, Buckshot and Skyzoo as well. The show kicks off at 7PM and you can RSVP at Yamez@redbullmusicacademy.com (might not be necessary).

Check out a preview of tonight's discussion, as well as a new video for "Still Standing" by Pharaohe Monch and a preview of Sean Price's Mic Tyson (both are on Duck Down), with more Harlem Stage info, below...

A Tribe Called Quest revolutionized hip-hop production and paved the way for a new generation of producers, one of whom was James Dewitt Yancey, better known as J. Dilla. Dilla's innovative studio technique put him among most influential producers of all time, with credits that include tracks on ATCQ's Beats, Rhymes and Life and The Love Movement, compositions for Q-Tip, Erykah Badu, Common, the Pharcyde, De La Soul, as well as his own group Slum Village and countless others. Dilla created groundbreaking music that drew inspiration from jazz, rock, soul and everything between, before passing away in 2006. Berklee College of Music's acclaimed J. Dilla Ensemble pays tribute to his musical legacy. Part of Harlem Stage's Uptown Nights series; presented in collaboration with Revive Music Group.