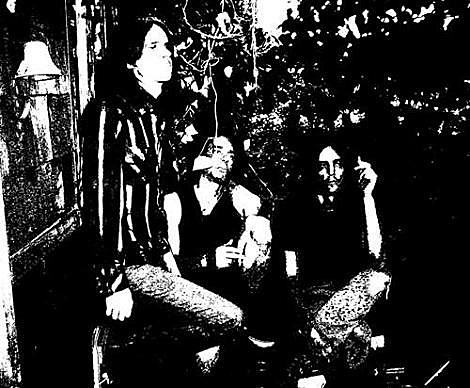 Call it the unofficial Tee-Pee-clusterfuck week if you want, but for nine days this August, four separate tours featuring bands on their label will pound NYC with a barrage of shows, with a few shows falling on the same day.... sigh.

First up, the psychedelic LA band Nebula have announced a US tour with The Entrance Band. That includes a stop at Santos Party House on August 22nd with Naam. Tickets are on sale. Nebula are touring to promote their Heavy Psych (the LP name and in practice), which will pounce on an unsuspecting public on July 7th via Tee Pee. Check out "Pulse" and The Dagger" from that LP, both of which are downloadable above.

The Entrance Band (an Ecstatic Peace-signed band who are sometimes just called "Entrance") are also touring with Sonic Youth even sooner. In fact they are playing United Palace in NYC with them on July 3rd (tickets are still available).

The Entrance Band is one of a few openers that are scheduled for the Sonic Youth tour which has Sonic Youth taking July 4th and 5th off. The Entrance Band aren't taking as long of a vacation though. You can catch them headline Southpaw in Brooklyn on the 5th (this Sunday) with TK Webb & the Visions. Tickets are on sale.

Meanwhile, another Tee Pee band from the westside is hitting the eastern shores within a week of Nebula's show at Santos AND have a release coming on the same day as Heavy Psych. Night Horse, who share guitarist Justin Maranga and drummer Brandon Pierce with the mighty Ancestors (not the black metal band), have scheduled a pair of NYC area dates for the second week in August. They play Pianos on August 13th with TK Webb & The Visions and Union Pool on August 16th with Tournament and Orphan. Night Horse will release the first of a three part split 7" series planned for this summer with Dirty Sweet. Look for that 7" on July 7 and check out the first track, "Good Bye Gone", available above.

Next up, Swedish doom-proto types (or is that doom-prototype types?) Graveyard are scheduled to tour the US with CKY (yes, the one with Bam Margera's brother) which includes a NYC date at Gramercy Theater on 8/13, same night as Night Horse at Pianos. Tickets are on sale.

Oh, and did I mention The Warlocks shows at Bowery Ballroom and Maxwell's on August 14th & 15th respectively? Tickets are still available (BB here, Maxwell's here).

Although Ancestors are NOT on the road in any significant fashion, they recently announced their new album, the massively epic Of Sound Mind. Featuring contributions from David Scott Stone (Unwound, Melvins) and Sera Timms (Black Math Horseman), look for Of Sound Mind to hit stores on Oct 6th via Tee Pee Records. MUCH more on this record to come... highly recommended.

Full tour dates for Nebula, Night Horse, The Entrance Band, and Graveyard are below.