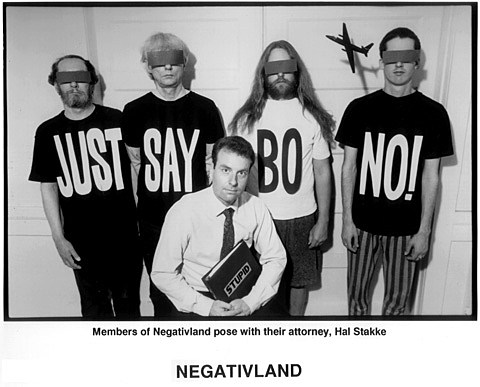 Don Joyce of electronic innovators and culture satirists/critics Negativland died Wedensday at his home in Oakland, CA. He was 71. A DJ at Berkley's KPFA, he coined the term "culture jamming" and hosted his midnight sound collage show "Over the Edge" since 1981 and continued to broadcast. Negativland shared the sad news on their website:

Negativland had found its "lead vocalist" without even realizing they were looking for one. It was Don who took the idea of reshaping previously recorded words - in a pre-sampling age - and ran with it to an extent and depth never before heard, and never equalled. "Recontextualization" became his weapon, with the 1/4" tape machine and razor blade his ammunition, and the radio "cart player" - an entirely forgotten piece of broadcast history using endless-loop tape cartridges, which he used until he death - his delivery system.

When he and Negativland discovered their mutual love for "found" sounds, an intensely collaborative creative partnership was cemented. It continued non-stop for the ensuing decades, with Don endlessly scanning the airwaves of radio and television, along with his massive LP collection, for new material, day by day, week by week. There was often a TV and a radio on in his room simultaneously, cassette recorders always at the ready. And as an extremely shy and often quite reclusive person, radio was a perfect medium for Don. He could reach thousands of people each week without having to deal with very many actual humans, just as he preferred it. Creating art was not only Don's full-time pursuit, it was literally his life's work. He had made it clear to the group as recently as a few weeks ago that he was happy and satisfied with what he had been able to achieve in his life, and were he not able to continue to work, his life would feel as good as over.

You can read the entirety of Negativland's tribute to Joyce here. This is the second Negativland death this year: '80-era member Ian Allen died in January from a heart attack.

Joyce was an integral part to Negativland's most acclaimed work, namely 1987's Escape from Noise and 1989's Helter Stupid. Their most famous work, though was 1991's "U2" single which set a expletive-laden blooper reel of America's Top 40 host Casey Kasem trying to read the intro to U2's first appearance on the show ("These guys are from England and who gives a shit!") over a sample the Irish band's "I Still Haven't Found What I'm Looking For" and other found sounds. U2's label Island Records sued Negativland, saying that the cover art mislead U2 fans into buying the record, and over copyright infringement of the sample. It made the news and the whole debacle later got turned into the 1995 album Fair Use: The Story of the Letter U and the Numeral 2. You can stream the "U2" single below -- it's still funny.

Negativland also announced that all of Don's "Over the Edge" radio shows will be available later this year via the Internet Archive. Rest in peace, Don. You'll be missed but your work lives on.