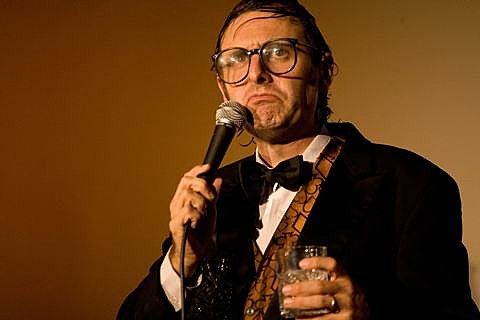 If the great Neil Hamburger schedules a date in the New York City area, you can bet your jorts-wearing ass that your man Klaus will be there. I can think of no more enjoyable way to spend an evening than consuming alcohol without interruption in a darkened club and thrilling to the rapid-fire vulgarity of a Neil Hamburger stand-up set. For the uninitiated, Neil Hamburger brings to the stage an immense library of "What do you call a," "Why did," and "How many" quick-to-the-punchline jokes delivered by a velour-suited, washed-up, alcohol-decimated specter of a lounge comedian. It is truly brilliant. Anywhoozle, Neil announced a shit-ton of dates a while back but didn't have any scheduled for NYC... UNTIL NOW. It has just been announced that Neil Hamburger will be performing at the Bowery Ballroom on Saturday November 9. Tickets go on sale Friday (5/31) at noon.

Neil has several supporting acts that vary throughout his tour. Some folks get Bonnie Prince Billy (!). Some folks get Major Entertainer Mike H. Other folks, including NYC, get Tim Heidecker. We also get comedian-ventriloquist, and all-around super awesome lady Carla Rhodes. I am not entirely sure what to expect from a Tim Heidecker solo gig, but as a fan of his I am excited nonetheless. Complete Hamburger tour dates are below.

Speaking of Tim Heidecker, his better half, Eric Wareheim, has just dropped yet another balls out insanely great music video. This time it's for Major Lazer track "Bubble Butt" (feat. Bruno Mars, 2 Chainz, Tyga & Mystic). You can watch that insanity below. Bye!