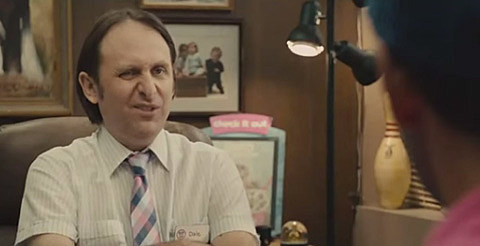 He's best known for his sweaty Borscht Belt yukkster alter-ego Neil Hamburger, but Gregg Turkington has had an active career outside of that. In addition to running Amarillo Records (home of Anton LaVey, the Pop-O-Pies and Harvey Sid Fisher) in the '90s, he's appeared on Tenacious D projects, worked frequently with Tim & Eric and does a fair amount of voice work, most recently as Toby Determined on Gravity Falls. You can see him in his highest-profile role yet, the Marvel action-comedy Ant-Man, where he plays [SPOILER ALERT] the manager of a Baskin-Robbins who fires Paul Rudd's character (who becomes Ant-Man) early in the film. You can see Gregg in action in a Japanese version of the trailer, below. non-Japanese, Turkington-free trailer is below too.

The film is a bit controversial in the Marvel/comic-con scene as the project originated as a labor-of-love adaptation by Edgar Wright and Joe Cornish (Shaun of the Dead, Scott Pilgrim, etc) but parted ways from Ant-Man after production was underway. (Fans were not happy.) Director Payton Reed (Bring it On, Down with Love, lots of Merge Records bands' videos) took over and the finished product bows July 16.

Neil Hamburger, by the way, is still alive and well making awful jokes on tour all over the country. He'll play Brooklyn's The Bell House on November 7 with Nick Flanagan. Tickets are still available. All dates, which include an appearance at Tenacious D's Festival Supreme, are listed below...