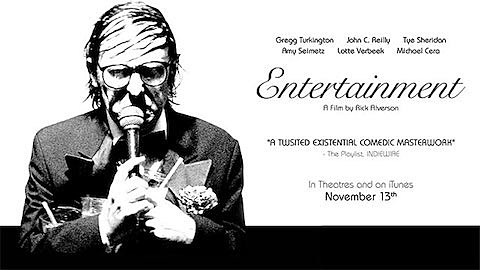 Rick Alverson's new movie Entertainment stars Gregg Turkington aka Neil Hamburger, and the film essentially finds him playing a version of Hamburger as he struggles through life as a low-level performer, on-stage and off. It co-stars Tye Sheridan, John C. Reilly, Michael Cera, Tim Heidecker, and has a cameo from David Yow of The Jesus Lizard. Entertainment was just released last week, and is available on-demand, and at Amazon and iTunes. It's also in limited theatrical release, screening in NYC at Film Society of Lincoln Center now through November 26. Check out showtimes and tickets here.

You may know director Alverson from his music videos for acts like Strand of Oaks, Sharon Van Etten, and others, or perhaps the polarizing 2012 film The Comedy with Heidecker, Turkington, and James Murphy, or New Jerusalem with Will Oldham.

Turkington is a busy man, having recently appeared in Ant Man and with frequent tours as Neil Hamburger. He also co-hosts the excellent long-running web series On Cinema for Adult Swim with Heidecker, which just wrapped up its 7th season and features Gregg and Tim as two film critics who love every movie they see (there's also a lot more to it than that). You can watch the whole thing at Adult Swim.

Check out the trailer for Entertainment and an On Cinema episode below.