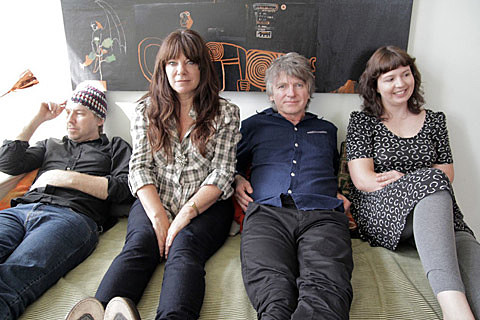 And the official bio says...

"It's always been the element of struggle that makes music human and exciting. Neil and Sharon Finn discovered that for themselves at home late one night in their pajamas, having their first jam, making a racket in the grand tradition of enthusiastic amateurs.

For Neil, after a career of writing songs and strumming guitars, it was liberating to be behind a drumkit, no chords or melody to navigate, just keeping time and making it swing. For Sharon, after raising 2 fine boys and coping with Neil it was just 3 notes, pure feel on the bass guitar...

And so inspired, Sharon and Neil were compelled to take it further. They invited respected Auckland songwriter and musician Sean Donnelly to lend a hand. The three of them went to work and steadily those jams became songs, a body of work more diverse and dynamic than any of them had imagined...."

As stated above, Pajama Club (who just officially changed their name from "Pajama Party") features the great Neil Finn and his wife Sharon Finn, with Sean Donnelly and Alana Skyring rounding out the lineup.

Already announced on the lineups of both Wilco's Solid Sound Festival (they go on right before Wilco) and Outside Lands in San Francisco, new June headlining dates are now starting to pop up. On June 23rd they'll play a show in Virginia (right after Solid Sound), and on June 26th you can catch them at Bowery Ballroom in NYC. Tickets for that show go on sale on Friday at noon.

All currently announced dates and a teaser video is below.

--
Pajama Party, "From a Friend to a Friend" teaser