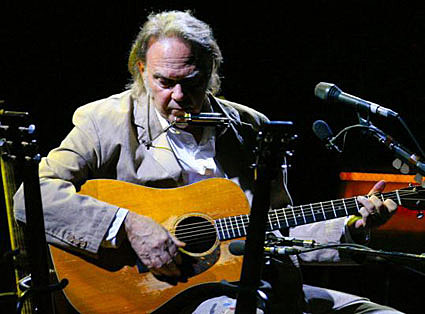 Neil Young is a notorious control freak, as he joked during Thursday's show. And he wasn't kidding. Fans walking into the Orpheum Theatre were given a small slip of paper informing them when, exactly, they could consume a beer. (During the opening act was fine, but not when Young took the stage.)

A pre-show announcement requested quiet and no shouted-out requests. Young had carefully developed his playlist, the voice said over the P.A. Please respect the artist. [The Boston Globe]

Neil Young plays the first of six NYC shows at United Palace tonight (Dec 12). Tickets were expensive, and some people will be standing. The first half of his sets are solo acoustic. The second half is electric with a band. Get there early if you want to get drunk? ha. Details on some paintings Neil will be selling to benefit the Bridge School, below....

BURBANK, CA--(Marketwire - December 11, 2007) - Neil Young's sold-out North American tour is wrapping up this week in New York. Receiving rave reviews in every city he visited, Young's unique sense of stage presentation was fully evident during the Chrome Dreams II Tour. Performing a solo acoustic set followed by an electric set with full band, longtime Neil Young fans ranked it high as among his strongest concerts ever.

One of the most intriguing things about the performances, besides a song selection that had audiences surprised and thrilled, was the visual look of the stage design. Featuring the feel of a movie set from days past, complete with original lighting fixtures from vintage films and a lived-in backdrop displaying neon letters off a movie marquee, one of the other striking elements were the song-title paintings by Eric Johnson. Painting onstage behind the band during the performance, Johnson created original works while Young played. During the band's electric set, Johnson would bring a different painting to a large easel at the front of the stage with each song's title appearing within the painting. It was a highly effective dramatic touch that gave the evening an extra visual dimension.

Now that the tour is almost completed, those original paintings done during the tour will be sold to raise money for the Bridge School, an innovative educational environment established over 20 years ago. Information will be available at www.neilyoung.com and www.bridgeschool.org concerning the sale of the paintings.