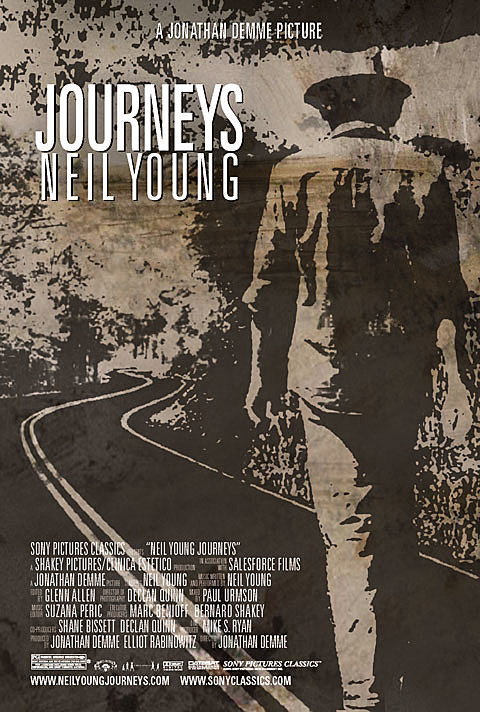 Neil Young Journeys, the new film documenting Neil Young's 2011 tour which was made with Jonathan Demme, will be opening in theaters today (6/29) in NYC and LA. It's the third film that Neil has made with Jonathan Demme (after Heart of Gold and Neil Young Trunk Show), director of such other music films including Stop Making Sense and Storefront Hitchcock, in addition to Hollywood films like Silence of the Lambs, Something Wild, and others. AV Club reviewed the film, giving it an A-:

As on Le Noise itself, the overcranked echo of Young's distorted guitar dominates the songs, captured via Young's trademark "PureTone" process. (For the film's première, held in Massey Hall during last year's Toronto Film Festival, Young trucked in his own sound system.) It's fascinating to hear old chestnuts like "Cortez The Killer" and "Cinnamon Girl" cut loose from their rhythm-section moorings, left to find new shapes or simply drift on a chord as thick and rough as a granite slab.

Neil Young Journeys opens in NYC today at Landmark Sunshine Cinema (tickets) and AMC Empire 25 (tickets). It will open in other theaters across the country within the next few weeks. Stay tuned for the full release schedule, which will appear on the website. The trailer is below.

As mentioned, Neil Young will be touring with Patti Smith later this year. That tour brings them to NYC for shows at MSG on 11/27 and Brooklyn's Barclays Center on 12/3. Tickets for both of those shows are still available.

The film's trailer is below.