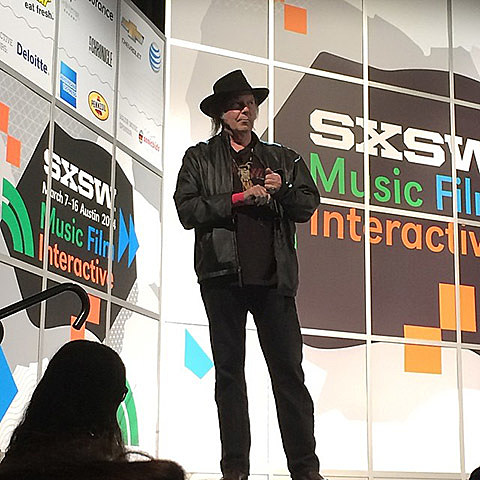 Neil Young talked about his new Pono high-resolution music system yesterday (3/11) at SXSW and cleared up a few things. It uses FLAC files but the sample rate is 192 kHz. (CDs uses 44.1 kHz). (The Toblerone-shaped Pono player will play other formats too.) Said Young:

When all the artists and engineers, all the arrangers and musicians that played on giant tracks by people like Phil Spector, with 12 tambourines and two pianos -- those people were still in the studios in Los Angeles, playing. But all of [that] started to die -- it was the most amazing thing, this vibrant creative culture started to go away. And it was because of the MP3 and the cheapening of the quality to the point where it was practically unrecognizable.

Then things got real awkward. Billboard reports that after Young's speech, Pono CEO John Hamm (not Jon Hamm) opened the floor to questions:

...the last question from the audience shifted the tone of the entire presentation. A young man asked: "What's your cut?" Referring, of course, to Apple's now-famous 30% cut of sales on the iTunes Store.

Hamm, after a flustered moment, responded: "It surprises most people that everyone who buys music from the record labels pays exactly the same amount." To which several audience members shouted, "What?!"

"That's a delicate question, isn't it?" Young asked. After which Hamm turned to the moderator, slightly flushed at this point, and said, "We can end it." "You can answer the question if you like," Snider said. Hamm shook his head slightly before Snider closed the discussion.

Perhaps his cut will be addressed by the time the Pono goes on presale this Saturday (3/15) via via Kickstarter. Watch a demo video below.

Speaking of SXSW, most of us at BV are here as we speak. You can follow our exploits via @BVSXSW and @BVAustin and on our @BrooklynVegan Instagram and @BV Austin Instagram.