Neko Case in Long Island in 2011 (more by Greg Cristman) 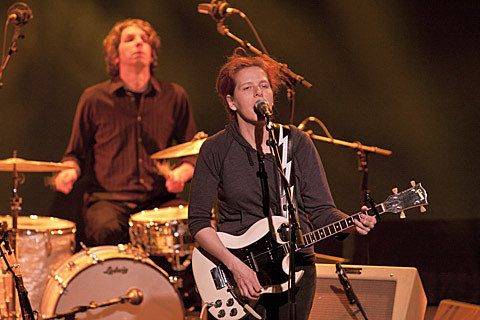 Cementing its status as one of the city's premiere free summer festivals, the second annual Lowdown Hudson Blues Festival will return to the spectacular outdoor plaza at the World Financial Center with full headlining sets from Buddy Guy and, in her first concert of 2012, Grammy-nominated singer-songwriter Neko Case. The two-day free concert will also feature an exceptional lineup of renowned blues acts and rising stars like John Mayall, Charles Bradley and the Extraordinaires, He's My Brother She's My Sister, and Quinn Sullivan.

Charles Bradley also has shows coming up at Beacon Theater, in Asbury Park and elsewhere.

Buddy Guy - At age 74, Buddy Guy is a Rock and Roll Hall of Fame inductee, a major influence on rock titans like Jimi Hendrix, Eric Clapton, and Stevie Ray Vaughan, and a pioneer of Chicago's fabled West Side sound. He has been awarded 23 W.C. Handy Blues Awards (the most any artist has received), the Billboard magazine Century Award for distinguished artistic achievement, the Presidential National Medal of Arts, and 6 Grammy Awards, including "Best Contemporary Blues Album" for his 2010 album Living Proof. Rolling Stone ranked him in the top 30 of its "100 Greatest Guitarists of All Time."

Quinn Sullivan - Quinn Sullivan is a 12-year-old blues guitar prodigy who has toured with Buddy Guy and been featured on several national television shows, including Ellen, Oprah, The Today Show, and Jimmy Kimmel Live.

John Mayall - John Mayall is often referred to as the "Father of the British blues." Founded in the 1950s, his band, John Mayall & The Bluesbreakers, has served as a launching pad for such legendary artists as Eric Clapton, Jack Bruce, Peter Green, John McVie, Mick Fleetwood, Mick Taylor, and many more.

Neko Case -Grammy nominated singer and songwriter Neko Case has developed a sound all her own: a mix of country, gospel, torch, and pop, and her five full-length solo albums (not to mention her two live collections and Canadian Amp EP) have won her critical acclaim and countless devotees.

Charles Bradley and the Extraordinaires - 63-year-old Charles Bradley released his debut album No Time For Dreaming in 2011 and has since gone on to win accolades for his haunting, soulful voice, and is one of the leading lights on the esteemed label, Daptone Records.