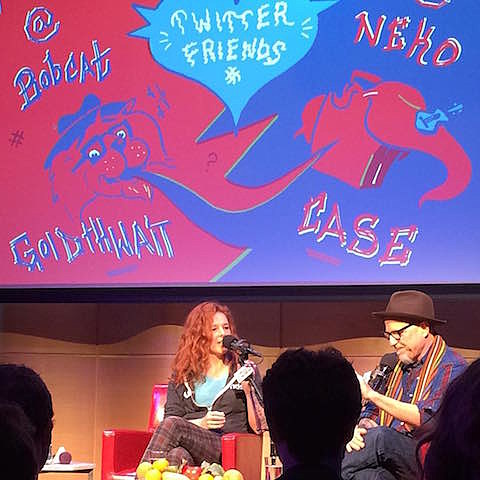 As mentioned, twitter friends Neko Case and Bobcat Goldthwait met in real life for the first time on Sunday (12/6) at WNYC's The Greene Space. It was webcast live but you can watch an archive of their conversation, moderated by Sean Rameswaram, that included such topics as public nudity, pet ducks and turkeys, the 'Billy Jack' movies, arrest records, Chad Kroeger's nose and much more. Watch below.

This came after Neko Case's show at the legendary Apollo Theater on Friday (12/4) that, like her new box set, took in songs from her whole career (plus a cover of Scott Walker's "Duchess"). USA Today was there:

Wait a second ... where's Case's backup singer and stage foil Kelly Hogan? Where are the evocative set backdrops that feature Case's drawings? Where's the drummer? The lineup was Case up front, plus bandmates Jon Rauhouse on guitar and pedal steel, Eric Bachmann on guitar and keyboards, and Tom Ray on bass guitar and stand-up bass -- and that's it. Ray was a one-man rhythm section, stomping on a tambourine to keep time. The set-up was smaller than her touring performances and far more intimate because of it. The lineup also allowed the band to showcase some of her earlier songs, which tend to be more stripped-down and traditional country. It was an odd juxtaposition, a show that felt more like it might feel to see them perform in a bar (and Case has spent years on the road doing just that) but inside the ornate, beautiful Apollo theater. It made for an unforgettable night.

Setlist from Neko's Apollo show is below...

SETLIST: Neko Case @ The Apollo Theatre 12/4/2015
Outro With Bees
Hold On, Hold On
Bought And Sold
Man
Vengeance Is Sleeping
Ghost Wiring
This Tornado Loves You
Look for Me (I'll Be Around)
Nothing to Remember
Blacklisted
I'm From Nowhere
Night Still Comes
At Last
Duchess (Scott Walker cover)
The Needle Has Landed
Middle Cyclone
Maybe Sparrow