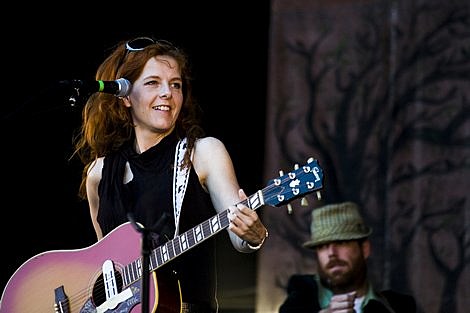 Neko Case has some new stops on her fall North American tour. Her previously announced date at Beacon Theatre on November 16th, with Joey & John of Calexico opening, seems to only have single tickets available. One of the new shows is a performance the night before (11/15) at Wellmont Theatre in Montclair, NJ. Tickets for that go on sale Friday, September 18th at noon. Joey & John of Calexico open NY & NJ (and a few other dates on her tour).

Case is also on the lineup for the New Yorker Festival (October 16th-18th). More specifically, "Neko Case talks with Sasha Frere-Jones: A Conversation with Music" happens at 7:30 p.m. at Acura at Stage37 on 508 West 37th Street on Saturday, October 17th. Tickets for that and all New Yorker Festival events also go on sale Friday at noon.

The singer recently stopped by NPR's World Cafe Live for a session on September 11th. She's currently on a short UK tour, that included a stop in Nottingham on September 12th...

Neko Case took us on a whirlwind tour of her wildlife theme park with songs from Blacklisted, Tigers Have Spoken and Fox Confessor, all evidence of her growing stature as one of alternative country's most original writers.

Hogan supplied most of the spoken intros. "Things That Scare Me" opened a group featuring "People Got A Lotta Nerve", "Fever" and "I'm An Animal". "Hold On, Hold On" was a cracking product of the redhead's partnership with the Sadies. [This is Nottingham]