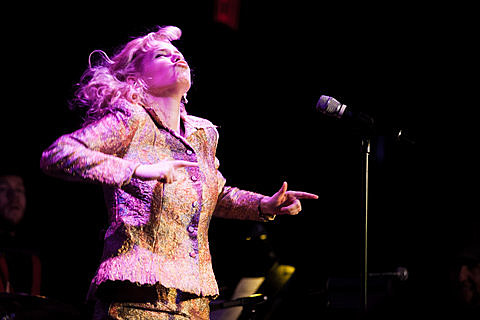 Nellie McKay, who is currently on tour supporting Madeleine Peyroux, will again bring I Want To Live! to NYC, as part of a string of dates in late November. This time, McKay will hit Hiro Ballroom on November 26th, and tickets go on sale Friday at 10am. Full tour schedule is below.

McKay can also be found on the recently released Note of Hope, A Celebration of Woody Guthrie, a collection of collaborations with Rob Wasserman that focus on Guthrie's work. Also on board for Note of Hope are such notables as Jackson Browne, Ani DiFranco, Kurt Elling, Michael Franti, Tom Morello, Van Dyke Parks, Lou Reed, Pete Seeger, Studs Terkel and many others. Look for it on 429 Records, stream some material at the site.

Note of Hope / Feat. "You Know The Night" - Jackson Browne