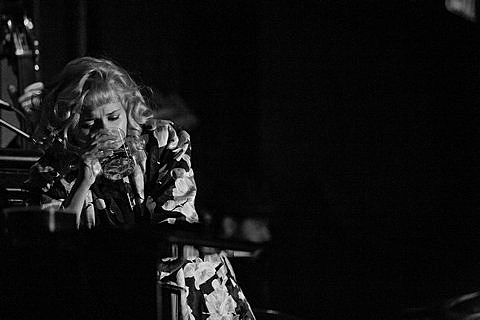 Earlier this year, Nellie McKay released My Weekly Reader, an album of covers of '60s songs by the Small Faces, Country Joe McDonald, Moby Grape, The Beatles and more. During the sessions for that album, she also recorded a cover of Gene McDaniels' "Compared to What" which didn't make the cut. We've got the premiere of that non-album track in this post, and you can listen below.

Nellie is about to begin a tour this weekend, which hits NYC on Sunday (11/8) at The Cutting Room. Tickets are available, and proceeds benefit the Wild Bird Fund.

Nellie will also be one of the guests at The New Standards' show on December 11 at Lincoln Center. (Update: This post initially listed the incorrect lineup. Full lineup TBA.) All dates are listed below.

The above photo of Nellie was taken at her Feinstein's residency in 2011 by our dear friend and former BV photo editor, Chris La Putt, who sadly passed away from cancer this year. Nellie told us that was one of her favorite pictures that Chris ever took of her, and she wrote the following for him:

Why do the good die young? Because Jesus wants them in heaven to frolic with the lambs.
Also Chris was fun to drink with & you know how Jesus is...
It shoulda been me - this guy was too nice to die.
What a tragedy...we miss you Chris.

Thanks for the kind words Nellie.

Listen to the new song and browse her tour dates below...