Nellie McKay at Feinstein's in 2011 (more by Chris La Putt) 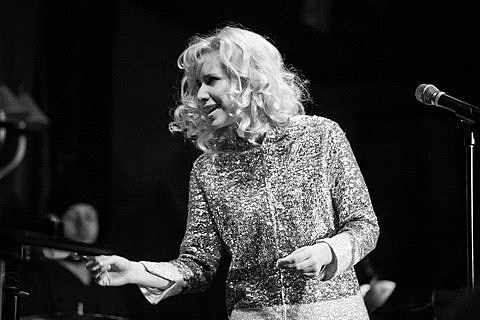 Nellie McKay is playing a few shows this month, including one at New London, CT's Garde Arts Center on Friday (10/5) and another at Outpost in the Burbs at the Unitarian Universalist Congregation on Saturday (10/6) in Montclair, NJ. Tickets for the Montclair show are on sale now. At the show, Outpost volunteers will be collecting donated women's clothing for Dress for Success of Morris County and "donors are encouraged to bring nearly-new suits and interview-appropriate women's attire (no shoes or accessories)." All Nellie McKay dates are listed below.

Nellie was just interviewed by Grace, during which -- before getting into her music -- they spoke about politics (an appropriate topic if you were watching the debates last night):

Are you concerned with what you see happening this election year, and the possible ramifications for women?

Yeah, well, it's hard to believe it's 2012. A woman's body is still not her own. The whole thing is, we have to have control. Birth control was a very strong statement - control is a very powerful word. But we still haven't got it. If you don't have that power over your own body, what power do you have? Sex education should be widely available. Anyone who doesn't like abortion should be supporting all the sex education, all the access to birth control. It doesn't make sense that the top anti-abortion groups oppose those things. It's ludicrous.

Yes, you can almost see a society where if those things were really robust, abortions would possibly decline?

Right. It's all about making informed decisions and choices. But it's worth noting - and I believe I remember reading that roughly half of all abortions - those people were on birth control. These things do fail. And let's not forget, feminism isn't just about the right to not have a child; it's about the right to have a child. So in countries where women are limited to one child, or there is infanticide against girls, no one is talking about that. It's all about us being in charge. ... I still think we need a better system; the two parties just aren't cutting it.

A video of Nellie from her Madison Square Park show in July and a list of all dates are below.