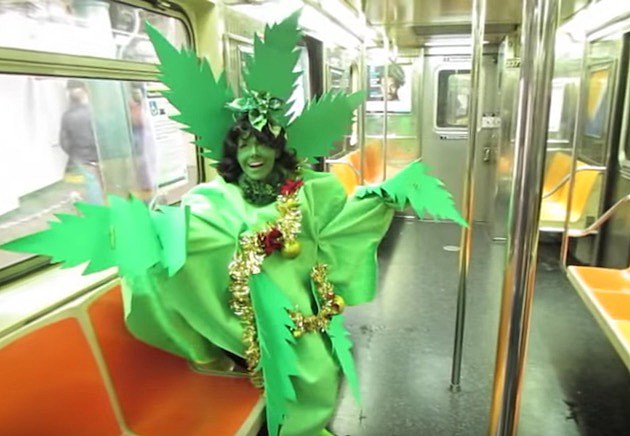 The Christmas songs keep coming. We're now getting one from Nellie McKay (who released a '60s covers album this year) called "WEED (All I Want for Christmas)." It's a collaboration with Minneapolis' The New Standards and Nellie shares lead vocals with Maurice Jacox. A sample of the lyrics goes like this:

The video, meanwhile, has Nellie dressed up a giant marijuana leaf, bringing cheer to folks all over NYC. Watch tit below.

Nellie was also just on The Best Show this week with comedian Jo Firestone (who plays Will Butler's holiday show in NYC tonight, 12/17), taking calls as #HOLIDAYPROBLEMSOLVERS. You can listen to the full episode HERE.

In other recent Best Show news, host Tom Scharpling accused Google of ripping off the song he wrote for The Best Show, "Come on Y'All It's Time To Have Fun" for a new commercial. He tweeted, "STEAL FROM SOMEONE WHO GETS PAID, YOU RATS," and gave the following statement to Pitchfork:

Google is a terrible company whose crimes against humanity are legion. And shamelessly ripping off content from a radio show that I have written and performed for free over the last fifteen years is merely their latest shameful act.

I will be pursuing this matter to the fullest extent of the law. Future updates and new episodes of The Best Show will be posted at www.TheBestShow.net.

The good guys will win in the end!

You can watch the Google commercial below. Scharpling isn't the only person Google has recently been accused of ripping off for a commercial. Comedian and Valley Lodge frontman Dave Hill (who took over The Best Show's slot on WFMU in 2013) accused them of ripping off his band Valley Lodge's song "Go" (aka the Last Week Tonight theme):

Compare Dave's song and the Google ad below...