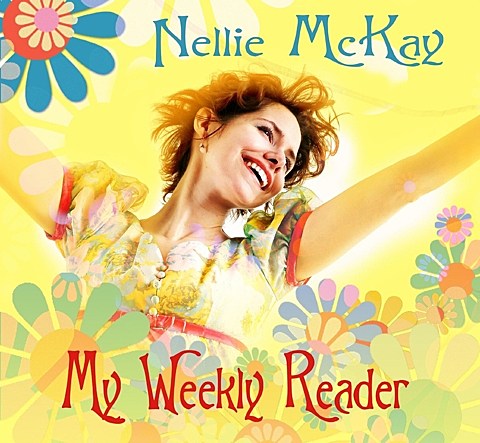 Singer/songwriter and actress Nellie McKay is releasing the followup to 2010's Home Sweet Mobile Home this year with My Weekly Reader on March 24. It's a '60s covers album that has her taking on songs by The Beatles, The Kinks, Crosby Stills & Nash, Small Faces, Frank Zappa, Herman's Hermits, Steve Miller Band, Richard & Mimi Farina, Moby Grape, Country Joe McDonald, Gerry & the Pacemakers, The Cyrcle and Alan Price. Keeping with the '60s theme, she recorded it with Beatles engineer Geoff Emerick. Her cover of Moby Grape's "Murder In My Heart for the Judge" came out a little while back and can be streamed below, and we've now got the premiere of her cover of another California psych/folk rock artist, Country Joe McDonald. She does "Not So Sweet Martha Lorraine," as you can hear while you watch the very appropriate visual accompaniment (by The Joshua Light Show), below. Tracklist below too.

Nellie's also going on a tour, which includes five shows at NYC's 54 Below, the cabaret supper club in the basement of Studio 54. She plays the club on April 13, 15, 16, 17 and 18. The venue's event description reads: "Led by a trail of incense, Nellie revisits some of the melodies from the 1960s in her new show. Celebrating the release of her new album, My Weekly Reader, she will travel to a land of strange and wonderful musical delights with the grooved assistance of her magical band, The Cosmic X-Rays (Alexi David/bass, Cary Park/guitar, Kenneth Salters/drums)... A splendid time is guaranteed for all!" Tickets for all five shows are on sale now.

On the day of the album's release (3/24), Nellie will play a free in-store at Barnes & Noble in TriBeCa at 6 PM. If you purchase the album at B&N, you get priority seating, and she'll be signing CDs afterwards.