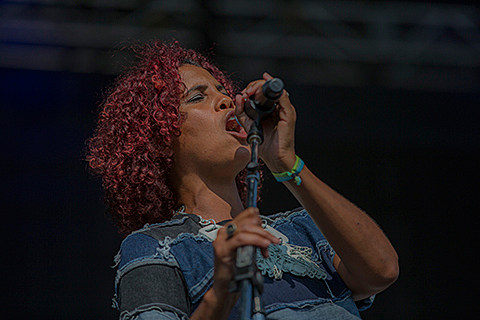 Earlier this year, Neneh Cherry put out Blank Space, which was her first solo album in 18 years and featured production entirely by Four Tet and a guest spot from Robyn. Now it's getting a deluxe edition release on December 2 via Smalltown Supersound. That includes a bonus disc of remixes, including a Joe Goddard (Hot Chip) remix of the Robyn collaboration, and DJ Spinn's remix of "Spit Three Times" which you can stream below.

Believe it or not, Cherry has never played a show in NYC. She was set to tour with Fine Young Cannibals in 1989, a tour that included shows at Beacon Theatre in NYC, but cancelled that tour after contracting lyme disease while living on a farm in Westchester. She's finally changing that when she comes here on her 2015 tour to play Highline Ballroom on January 9. That show's being opened by guitar great Kaki King and DFA's multitalented Sinkane, making for an awesome bill all around. Tickets for that show are on sale now.

The Highline date is her only currently announced US show, but she's got shows in Europe, New Zealand and Australia too. All dates are listed, with the new remix and deluxe edition tracklist, below...