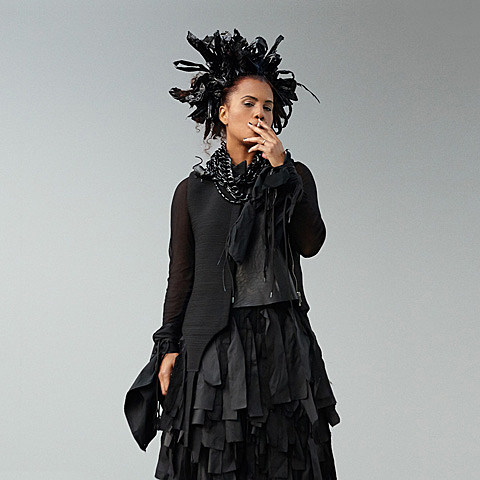 2014 saw the release of Blank Space, the first new Neneh Cherry album in 18 years, which she made with Four Tet. Neneh recently made a video for the LP's current single "Spit Three Times." She talked about the personal nature of the song and video with The Fader:

[Director]Bafic picked up on the intimate nature of my lyrics in this song. When I wrote it, I had been through a terrible trauma in my life (my mother passed away suddenly, which literally broke my heart and took me down down down into a huge black hole of despair). I am being very specific when I talk about the 'black dog' which was Winston Churchill's name for his dark depressions. I am a fighter and I fought back from the edge of hell. Bafic captures this fight with his imagery, especially the flowers and the long motorway (freeway) underpass shots. I am very proud of this simple yet effective little short film. It means a heck of a lot to me personally.

Check out the video below. Neneh will soon be making her long-time-coming NYC live debut at Highline Ballroom on January 9. Kaki King has been added to the bill that also includes Sinkane and tickets are still available. It's her only North American show scheduled for now but she does have dates in the UK and Australia coming up and all are listed below.

It is always difficult to narrow it down to a top ten anything. There is so much I could include and to be thankful for but I have tried to pick a few standout things from the past few months. It is a mix of good food, music, people, and places, which is basically all you need in life!

Check out Neneh's list of 2014 favorites, and that music video, below...