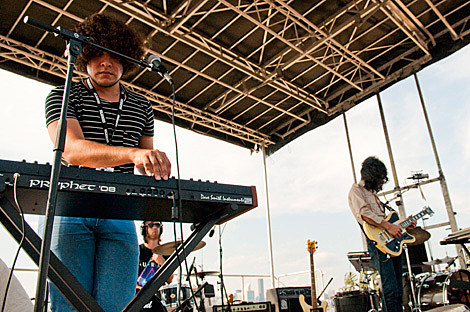 Neon Indian: I think I'd probably have to do a little more touring to draw that conclusion. And although it's cliché, I think that the most fun that the band will consistently have is in New York City. We played at Cameo, Studio B, even McCarren Park; there's such a wide variety of venues that each have their own appeal and charm, and every show we've played has never been the same crowd twice, there's always been a slight variation. But I feel like I'm preaching to the choir, considering the band is relocating in December.

That quote is from a newly-posted Pitchfork interview with "Neon Indian" though to be specific, it was with Alan Palomo who also plays as Vega, and it was Vega who actually played in all of those NYC venues. Neon Indian (currently residing in Texas) (despite their claim on MySpace that they are from "Brooklyn/Austin") has only played in a random warehouse so far (and maybe The Living Room if you count the kids show they/he played the next afternoon). Actually, that interview even happened before those CMJ-time Neon Indian shows (as evidenced by Alan's answer to the last live show he saw) (Phoenix at the Monolith Festival in September) (not that it matters).

Also, Neon Indian is not actually moving to NY in December. They had planned to and still want to, and still may in February, but no definite plans at the moment.

Neon Indian will be back to visit in December though. First they play at two sold out shows at Mercury Lounge and then a show they just added at Brooklyn Bowl on December 17th. Tigercity is opening. $5.00 tickets will go on sale this Friday.

Meanwhile Vega is rumored to have signed to Fool's Gold (not to be confused with the band that is playing MHOW tonight). It's the A-Trak-co-owned label that put the new Kid Sister record "Ultraviolet" this week. Kid Sister has a NYC show coming up at Webster Hall on Friday 11/27 with Flosstradamus.