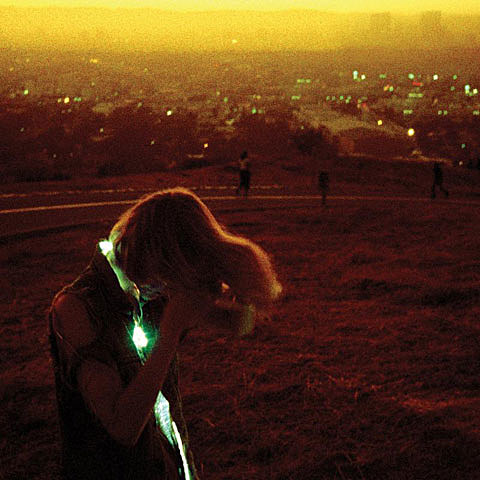 Back in April, we mentioned that Neon Indian (aka Alan Palomo) was working on a new LP, though little information was available. It's since been revealed that the album will be titled Era Extraña and will be released "on Palomo's own Static Tongues imprint in conjunction with Mom + Pop Music in North America, Transgressive Records in the United Kingdom and Europe, Pop Frenzy/Inertia in Australia and Big Nothing Records in Japan." That's the cover art above.

Alan, who hates the term 'chillwave' anyway, further distances himself on this album from the 'genre.' While bands like Toro y Moi and Memory Tapes are practically full blown disco acts, with Era Extraña, Neon Indian is diving more into the psychedelic pop he created on his 2009 debut Psychic Chasms. Though he's no longer using those sometimes-tongue-in-cheek song titles like "Deadbeat Summer" and "Terminally Chill" to let you know his synth pop is more on the experimental side. He's instead exploring new sounds and musical themes that demand to be taken more seriously. Running throughout the album is a three-part instrumental piece titled "Heart: Attack", "Heart: Decay", and "Heart: Release". He flirts with late '80s shoegaze on the guitar-driven "Blindside Kiss." Like other lo-fi artists are starting to do, he's embracing clearer pop vocals on some of the tracks like "Polish Girl" and "Hex Girlfriend," but the most interesting element of the new album is the experimentation with electronics. Era Extraña doesn't come off as the work of a pop artist with a keyboard and reverb, but rather an experimental artist who understands pop.

The video for "Heart: Attack" surfaced with that initial album announcement in April and now the one for "Heart: Decay" is available as well. Check both out below. The album was produced and mixed with Dave Fridmann, known for his work with The Flaming Lips, who Alan recorded a 4-track EP with earlier this year. The EP was even more far-out and experimental than anything by either artist involved. Vinyl pressings of that EP sold out pretty quickly but there are some available on ebay. Or try mediafire at your own risk.

Neon Indian will tour in support of the album this September and October. Whether Danny of the Big Sleep is still on guitar by that point, like he was at Governors Ball, remains to be seen but is likely if the tour doesn't coincide with the release of the new Big Sleep album (which is coming soon). All dates are listed below.

The Neon Indian tour concludes in NYC on October 21 at Webster Hall which means the show is probably part of CMJ. Check ticketmaster for Webster Hall tickets (or maybe wait to see if you can get in with your CMJ badge).

While Neon Indian's music is soaked in nostalgia, the Webster Hall show and other October dates are being opened by the futuristic electro-pop duo Purity Ring. As of now, the Webster show will be Purity Ring's first in NYC. Com Truise also open some dates on the tour.