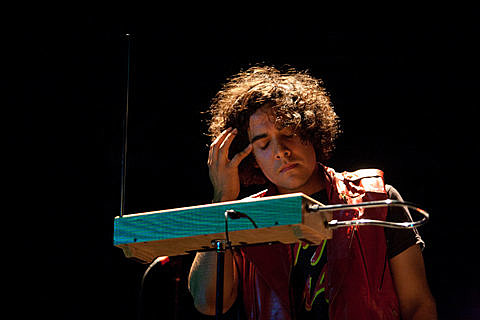 "The Levi's brand and Urban Outfitters are bringing Boston music fans a free concert with a twist - a show by Neon Indian powered exclusively by generators in a truly unique and top-secret location. The first show of the "Secret Generator Series" happened last weekend with Deerhunter playing a show below an underpass in downtown Chicago. Now it's time to announce the secret Boston location for the Neon Indian show:

Neon Indian will play
Sunday, Oct. 3 at the Power Station at 540 Harrison Avenue in South Boston. Doors at 3pm, show at 4pm

That Boston show is a pitstop for Neon Indian who are currently on your with Prefuse 73 and Miniature Tigers. That tour ends in Toronto on 10/12 (with Class Actress replacing MT on the final two dates).

Neon Indian will then be back in NYC for at least two shows at the end of the October. The first will happen at TBA location on 10/23 for CMJ. The second will be a normal old show at Brooklyn Bowl on Friday, October 29th. Tickets for that last one go on sale Monday at noon.