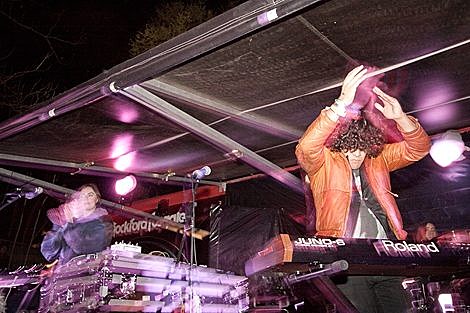 Neon Indian will be playing with Avi Buffalo at their free South Street Seaport show, as part of the summer series there, on July 30th. The almost-full schedule of free Seaport Music shows will be announced soon, but it already also includes Best Coast, Thee Oh Sees, Bear in Heaven, YACHT, Zola Jesus and others.

UPDATE: Though announced in a set of Avi Buffalo tour dates, I was informed that Neon Indian is NOT playing South Street Seaport (I guess he was supposed to... but probably took a different summer show... stay tuned for who is playing and where Neon Indian is playing instead. sorry.)

UPDATE 2: Chad VanGaalen is playing with Avi Buffalo at the Seaport on July 30th.

Before then, Neon Indian opens one of Massive Attack's Terminal 5 shows, and has their own show at Music Hall of Williamsburg on June 17th. Tickets are still on sale for the MHOW show (and for Terminal 5 too).

More tour dates for both are below...