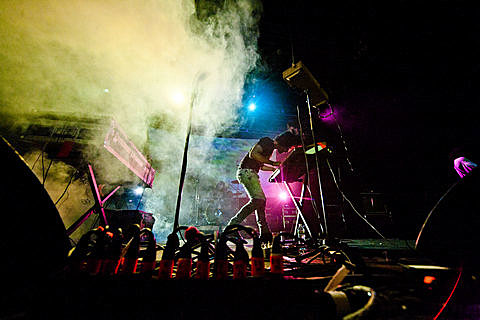 Era Extraña, the upcoming album by Neon Indian (aka Alan Palomo) will be released next week on September 13 via Static Tongues/Mom + Pop. While you wait, you can stream the entire over at NPR. You can also listen to "Fallout" and "Polish Girl" HERE and listen to "Hex Girlfriend" below. The album is available for pre-order at Neon Indian's website.

The day of the album's release, Alan will DJ an instore at Other Music (9/13) in NYC. Admission is free and the event lasts from 6 - 8 PM. According to Other Music's site, Alan will also be "signing records and hanging with the fans all evening." After the instore, Alan will make his way over to Music Hall of Williamsburg to DJ the 826NYC Prom, which also features DJ sets by Yeasayer, BAIO, and CANT. Tickets for that are still on sale.

Neon Indian's tour with Purity Ring and Com Truise kicks off two days after the album's release and culminates in a CMJ show at Webster Hall on October 21. Tickets are still on sale.

For Fashion's Night Out, which takes place in NYC on Thursday (9/8), the Philip Lim boutique (115 Mercer Street) will transform into a "Girls on Bikes stop" from 6 - 9 PM. It's "in the vein of a truck stop but for chic girls around town who ride bikes." Those who attend will be able to pick up tickets to see Neon Indian at the penthouse at the Mondrian Hotel in SoHo (150 Lafayette), where he will perform for an invite-only crowd later on in the night.

Updated dates and song stream below...