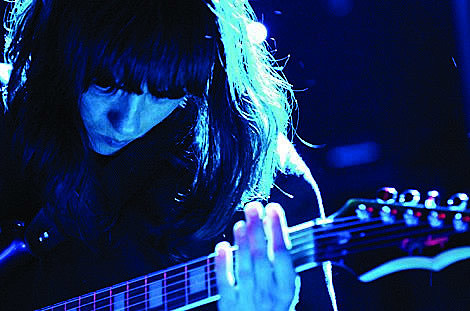 Mini festival Neon Marshmallow is making its way to NYC, after two successful outings in Chicago. The festival will call Public Assembly home over three days (10/14 - 10/16), featuring live performances, DJ sets, and visuals from many artists who embrace experimentalism. Among the bands performing at the fest are names like Tim Hecker, Rhys Chatham (who celebrates 40 years of The Kitchen in September), Grouper, Phill Niblock, and many others that range in genre from Alan Licht to The Men (who are currently touring and will play Saint Vitus on 9/17) to Xeno & Oaklander to La Big Vic. The festival is currently selling weekend passes, though no word on individual days or who will perform on each day. Full lineup is below.

In other news, Grouper, who recently played LPR and Glasslands, has a new digital 7" available. Stream the title track from Grouper's latest Water People 7" below alongside the full Neon Marshmallow lineup.

October 14 - 16, Public Assembly Brooklyn, NY
...The event will consist of six shows. Four shows and the Soiree after after party on Friday & Saturday from 1am - 4am.

The venue sound will be expanded with the addition of the full-spectrum Bunker sound-system, in addition to PA's recent install of Turbosound subs.

There will be an hour of Reyka vodka open-bar on Friday & Saturday for all attendees...