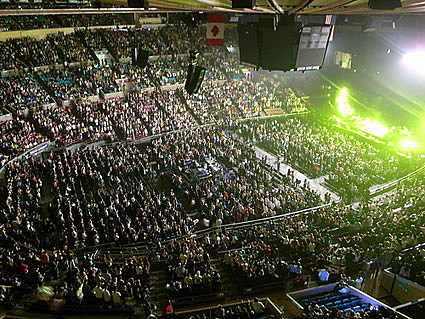 N.E.R.D.'s new album Seeing Sounds will be out June 10, 2008. "Everyone Nose" is the first single. You can download the MP3 above. The video was (at least partially) shot here at Gypsy Tea in NYC in April, and it features a bunch of cameos including Lindsay Lohan and Kanye West (who N.E.R.D. played with last night at Madison Square Garden). You can watch that below...

"We made this music anticipating the live show," explains Pharrell. "That was the most important thing. We know what we want to do on stage - we want to get fucking crazy, fucking insane - and if we make pussy-soft songs, no one's going to want to jump."

Pharrell takes it one step further. "No one will ever know what kind of a rush it is on stage to play these kinds of songs until you experience it for yourself. But that's the thing, we wanted to give that feeling to our audience."

Watch them play it live on Letterman.