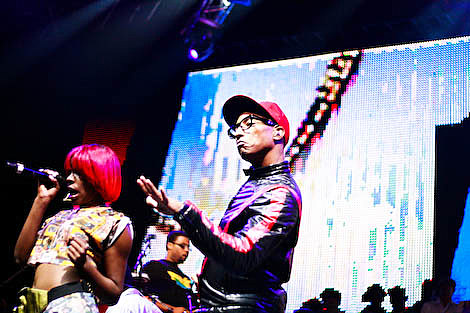 American rapper/producer/designer/all around great bro Pharrell Williams has recently confirmed that his rap duo N.E.R.D. will pen a track for the 2010 World Cup in South Africa.

"We have submitted a track to FIFA which will hopefully be chosen as the official anthem," Williams told Sun newspaper. "I follow football a little bit - it would be great if it happens."

The announcement follows in the footsteps of a slew of recording artists with the same aim, including Akon's "Oh Africa" and K'Naan's "Wavin' Flag". [Shoutcast]-

I'm guessing that "Lapdance" won't be their official submission, but odds are you can hear N.E.R.D. play said banger when they headline Irving on April 28th with the great Jay Electronica. Tickets are on sale.

Jay Electronica plays SUNY Culture Shock Fest earlier in April (as does Black Milk) and is also on board for Bonnaroo along with Stevie Wonder, Phoenix, Melvins, and many many others in June. He recently told MTV News about his wishes to collaborate with another hip hop artist, Chicago's Lupe Fiasco. Lupe plays two sold-out nights at Irving on April 10th and 11th with B.O.B.

Full NERD dates and some videos are below...