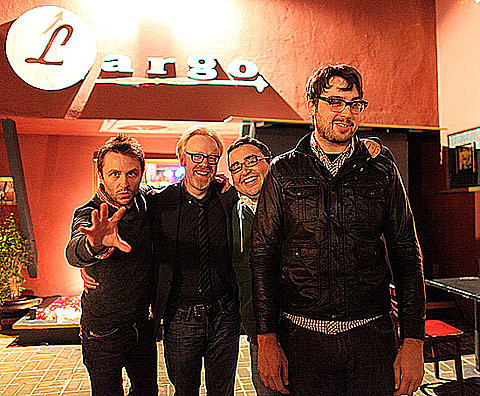 On August 16, 2011 at 8:18 PM, a whistle-blower came forward and called me out on something that I've been hoping would go unnoticed during my tenure as an esteemed, beloved, respected, deified, reviled, BV contributor; my grammar sux. So now I am back at school, bonin' up my wordliness. But with all this classwork and homework, I only have time for a quickie post thingy for you fine folks. So here goes. Tickets for the partially Kickstarter-funded 2011 Eugene Mirman Comedy Festival went on sale a while back and, as expected, ticket sales were rather brisk (brisque?). As a matter of fact, a few shows sold out faster than I could say "It's IT'S not ITS?" The shows that sold out fast were An Evening Of Science featuring StarTalk Live with Neil deGrasse Tyson plus Kristen Schaal, Eugene Mirman and Scott Adsit on Thursday September 15th and The Archer Variety Hour and Panel featuring Jon Benjamin, Aisha Tyler, Adam Reed, Jessica Walter, Matt Thompson, Amber Nash, and Lucky Yates which happens on Saturday September 17th. Both shows are happening at the Bell House. HOWEVER, according to delightful tweet by the Bell House Bot, tickets for those shows will go back on sale today, Tuesday September 13 at noon! Get those F5 buttons ready people! Full updated fest lineup below.

In other sold out Bell House comedy news, once the smoke clears from the Eugene Mirman Comedy Festival, the great Marc Maron will be in the House on Monday September 19th for a live taping of his better-than-most-other-podcasts podcast WTF with Marc Maron. Yeah, it's sold out, but so were those Eugene Fest shows... so you never know.

Oh, and speaking of live podcast tapings, The Gramercy Theater, who has a new booker in their ranks, has some pretty f-ing awesome podcast tapings coming up. On Friday October 14th, comedian Chris Hardwick brings The Nerdist podcast to the Gramercy with guests Jonah Ray and Matt Mira. In case you want to know, Jonah Ray is one of my favorite LA-based comedians in the business and it's a fucking honor to have him gracing our city with his tall, bespeckled, full head of hair having self. Do you like apples? Jonah is amazing. How d'ya like dem fackin apples? Tickets went on sale back on August 26th and the demand was so great that the added a show later that evening, happening at 10:30pm. It's going to be so awesome. Trust me. Hummus breath.

And speaking of the Gramercy Theater and live tapings, Klaus favorite Doug Benson will have a whopping TWO LIVE PODCAST TAPINGS at the Gramercy on Sunday October 23rd. He kicks things off at 4:20pm with The Benson Interruption. If you haven't seen an Interruption, you are missing out on some of the funniest shit ever. Doug invites his comedy friends to the stage and, while they attempt to do stand-up, he interrupts them. It. Is. The. Best. Tickets are on sale as I type this, so get on that shit Tout de suite. Later that evening, at 8:00pm, Doug brings his legendary Doug Loves Movies podcast to the Gramercy stage. At this point in the evening, I can tell you that Doug and his yet-to-be-announced panelists will be feeling prettttttty loose. As a person who has seen these shows live in the past, I must insist you dust the cobwebs off your wallet and check these suckers out. It may be the best Saturday October 23rd in your miserable lives. And after the shows, go home and buy Doug Benson's new CD Potty Mouth. The package features a CD AND a DVD. Schwing. Welp, I guess I gotta hit the books. Smell ya later.