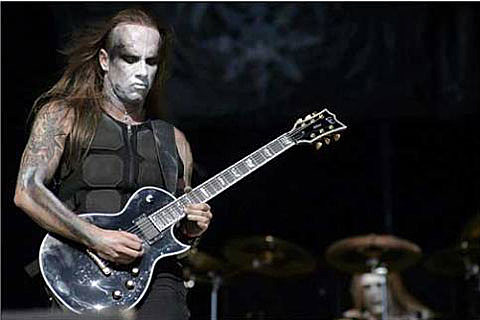 Adam "Nergal" Darski, the 33-year-old guitarist/vocalist from Poland's greatest extreme-metal export, BEHEMOTH, has been diagnosed with a life-threatening form of leukemia, a cancer of blood-forming tissues of the bone marrow. The disease, for which Adam is currently receiving treatment at the hematology division of the Gdansk Medical University Hospital, has advanced to the point where he is in urgent need of a bone-marrow transplant. (A bone-marrow transplant is when special cells [called stem cells] that are normally found in the bone marrow are taken out, filtered, and given back either to the same person or to another person.) In light of this, Darski wants to remind everyone about the need to be on the marrow registry. The more people get tested and donate, the more of a chance for life there is for him and others in the same situation. -[Blabbermouth]

Nergal received his first set of chemo treatments today and is "in great spirits" (according to Lamb of God's Randy Blythe), but is still in need of a bone marrow transplant. To learn more about how you can donate bone marrow, head to marrow.org.

Behemoth cancelled all previous dates of a tour with Watain, Withered, and Black Anvil. Now Watain have rescheduled, but this time with Black Anvil and Goatwhore. The tour (sans Goatwhore) will play Santos on 12/2. Tickets are on sale. While Goatwhore isn't on the NYC date, they WILL play NYC on September 30th at Europa supporting The Black Dahlia Murder with Arkaik . Tickets are on sale.

Our wishes are with Nergal. All dates and some videos below...

Watain - Sworn To The Dark at Summer Breeze 2010, Dinkelsbühl, Germany