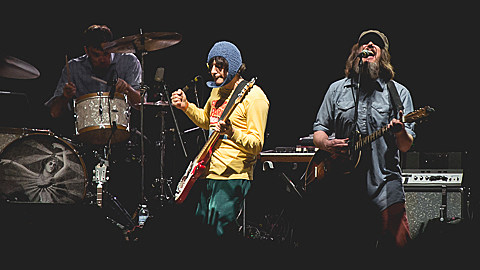 Neutral Milk Hotel have been playing tons of reunion dates since 2013, and they've now announced a 2015 tour that they're calling their "last tour for the foreseeable future." They write:

dear friends we love you but it's time to say goodbye for the never ending now to announce that spring 2015 will be our last tour for the foreseeable future and so we extend our deepest gratitude to all the beautiful people who came to see us over the last year.....

we'd also like to give thanks to ms. aurora borealis, father foam horse, and mr. valentich for there collaborative contributions to the "womb rume" message that made its way onto this ear area only a few months ago, but from now on, all ciphers shall be sealed exclusively by the meister milk. thank you.

No NYC dates on this one, but there's a few in the Northeast so you won't have to travel too far if you still haven't seen them yet and want to. All dates are listed below...