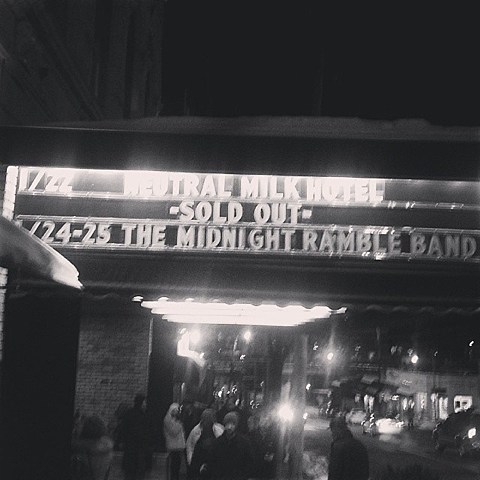 "Thanks so much for coming to the show. Thanks so much for listening to our music," said Jeff Mangum at Neutral Milk Hotel's Capitol Theatre show last night (1/22) as he stood on stage alone, about to launch into opening song "Two Headed Boy Pt. 1." It could be an oddly humble thing for a veteran band playing their first of six sold out shows in and around the same city to say, but you got the feeling Jeff wasn't being insincere. This is a band who ceased activity after releasing two indie records in the '90s, a time when indie bands didn't win Grammys. He probably never thought Neutral Milk Hotel would be on a tour at all in 16 years, let alone one this massive, and I think just about everyone in that room felt the same way. This didn't look like a crowd casually checking out a show, these were die-hard fans who probably couldn't believe they were seeing this band here, now.

I never saw Neutral Milk Hotel the first time around so I can't say how this compares to seeing them back then, but last night's show felt way too full of life to come off as a band having some fun for old time's sake, or worse, cashing in on a past success. He sang these 15-year-old songs with the urgency of a band getting out of the basement and onto the touring circuit for the very first time, not to mention that also says something of how timeless they are. The rest of the band were ace performers too, all of them multi-instrumentalists. With only five constant members and a few guests here and there (one of which was in openers/fellow Elephant 6 band Elf Power), NMH managed to get the show sounding as detailed as the record, switching between guitars, bass guitars, accordions, horns, saws, banjos and more in the middle of songs without missing a beat. All excellent players (the drummer was especially flawless), and these guys were into it. In a time where certain indie bands are taking the "slacker" thing a bit too far, it's nice to have a band we can almost all agree are indie legends come back and remind us how it's done.

As for the set, they gave us almost the entirety of In the Aeroplane Over the Sea mixed in with cuts from its predecessor On Avery Island and various tracks from their demos, EPs, and compilations. It was split up nicely too, never staying in one part of their discography for too long. So whether or not you were just all about the In the Aeroplane Over the Sea stuff or you prefer their deeper cuts, it was never long until you got catered to. And of course if you just love it all, there was just about no way you were walking out of that venue disappointed.

Neutral Milk Hotel at Capitol Theatre - 1/22/14 Setlist: (via)
Two Headed Boy Part 1
The Fool
Holland 1945
A Baby for Pree / Glow Into You
Gardenhead / Leave Me Alone
Everything Is
The King of Carrot Flowers, Part One
The King of Carrot Flowers, Parts Two & Three
In the Aeroplane Over the Sea
Naomi
Ferris Wheel on Fire
Oh Comely
Song Against Sex
Ruby Bulbs
Snow Song, Part One