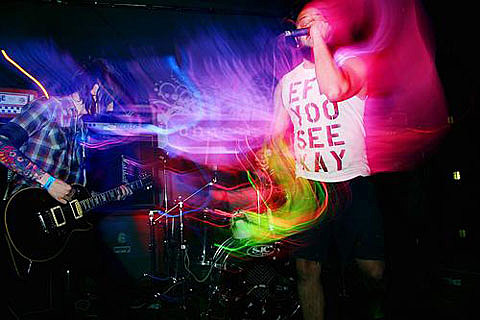 Ben Koller is a busy dude. Besides drumming for one of the most innovative hardcore bands in the land, Converge, the man is also working on a number of projects including Acid Tiger, his band with Lukas Previn (Thursday, The AKAs), Adam Wentworth (Bloodhorse), and J Rattlesnake. The foursome will release their self-titled debut on Deathwish with the first downloadable track, "Feel It", available above. Stream two more tracks at Deathwish. The LP hits stores on 4/27 (order it).

The Brooklyn-based punk band will celebrate the LP this weekend (their only current date) with a performance at the BV/1000 Knives presentation of Narrows along with I Hate Our Freedom (mem Texas Is The Reason) and Psychic Limb. Pre-sale ticketing is kaput, but tickets are still available at the door. It's one of two shows that BV/1000 Knives will present over the weekend, with The Red Chord, the NYC return of Premonitions of War, Tiger Flowers, and Descender rounding out the Sunday (4/25) lineup at Public Assembly. $10 gets you in at the door.

Adam Wentworth and Ben Koller have also announced their involvement in All Pigs Must Die, a new project featuring Adam's Bloodhorse comrade Matt Woods and Kevin Baker of The Hope Conspiracy (that recently played Cake Shop). The band recently recorded new material with Kurt Ballou for a forthcoming release.

BV/1000 Knives/AEG Live are also happy to present Converge at Santos Party House on 5/6 with support from Touche Amore, Lewd Acts, and the phenom Black Breath. Tickets are going fast, but are still available.

Some vids and all tour dates are below...