The Antlers at Moogfest (more by Diana Wong) 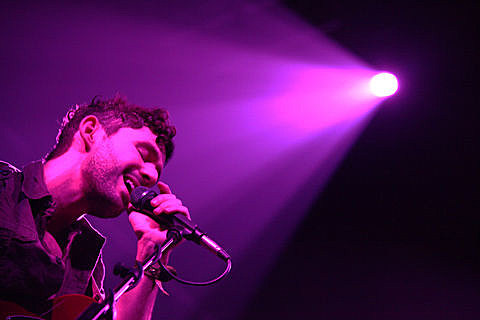 We recently mentioned that Sharon Van Etten and Shearwater are planning a tour together that hits NYC at Music Hall of Williamsburg on February 24 and Bowery Ballroom on February 25. Tickets for both NYC shows are available for AmEx presale now, and general sale starts Friday (11/11) at noon. All dates have also since been announced and are listed below.

After the tour, Sharon will go on a string of dates with The War on Drugs, who open for The National at Beacon Theatre the night before Sharon does. Sharon's new album, Tramp, comes out February 7 via Jagjaguwar.

Sharon's friends and fellow Brooklynites The Antlers are following their release of Burst Apart, which came out earlier this year, with the (together) EP, which features material from the Burst Apart sessions. It includes collaborations with Neon Indian, Bear In Heaven, Nicole Atkins, and a cover of The xx's "VCR," which you can download above. The EP's tracklist is below. The Antlers are currently on a European tour and will return to NYC for a Webster Hall show on December 10 with Suuns. Tickets for that show are still available.

Speaking of The xx, they've recently begun working on a new album and have started a blog, where they've posted the message:

We have started recording our second album! We have also started this blog where we will post our inspirations + pictures + favourite songs. We hope you enjoy it! Lots of Love, The xx

The Walkmen, whose drummer Matt Barrick guests on Sharon's new album, are also working on a new album with producer Phil Ek which will be released next year on Fat Possum/Bella Union.

Julianna Barwick, who is also a guest on Sharon's album, recently released the Matrimony Remixes EP, which features remixes of two of the tracks off of her most recent LP, The Magic Place, which came out earlier this year. The entire EP is available to stream and download for $5 on bandcamp and features remixes by Diplo & Lunice, Helado Negro, Alias Pail, and Prince Rama. Julianna also provided guest vocals to Korallreven's debut LP, which comes out November 15 via Acephale. Her vocals appear on the song "Sa Sa Samoa," which you can download above.

All dates and (together) tracklist below...