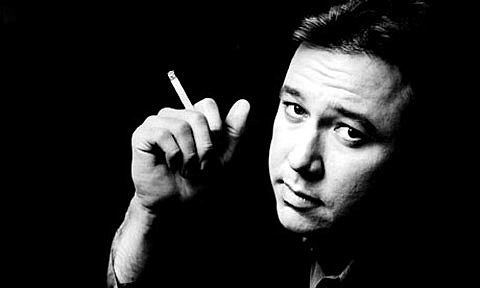 William Melvin "Bill" Hicks (December 16, 1961 - February 26, 1994) was an American stand-up comedian, satirist and musician. His humor challenged mainstream beliefs, aiming to "enlighten people to think for themselves." Hicks used a ribald approach to express his material, describing himself as "Chomsky with dick jokes." His jokes included general discussions about society, religion, politics, philosophy and personal issues. Hicks' material was often deliberately controversial and steeped in dark comedy. In both his stand-up performances and during interviews, he often criticized consumerism, superficiality, mediocrity and banality within the media and popular culture, describing them as oppressive tools of the ruling class, meant to "keep people stupid and apathetic."

Hicks died of pancreatic cancer in 1994 at the age of 32. In the years after his death, his work and legacy achieved the significant admiration and acclaim of numerous comedians, writers, actors and musicians alike. -[Wiki]

Bill Hicks is remembered via The Essential Collection, a compilation of bits and sketches culled from across the comedic great's career. It's a 2CD/2DVD set that includes bonus downloadable material.

The set boasts a feature-length film (Ninja Bachelor Party) and over five hours of video footage in addition to the more than two discs worth of audio, but it's more than just a collection of "greatest hits". The Essential Collection also features multiple previously unheard pieces as well, like the "Please Do Not Disturb" sketch and the original song "Turn Your Mind Over To Your Heart" written/performed by Hicks available for download above. Grab them, The set is due via Rykodisc on 9/14. Look out for it.

Full tracklisting and some video is below...

Bill Hicks: What is the point to Life

Download Card
Lo-Fi Troubadour' (Original Songs* - Written & Performed by Bill Hicks)*
1. Introduction
2. She's A Woman
3. Hey Mama
4. The Road Can Be Hard
5. Jazz Instrumental
6. The Moon Is Smiling
7. Turn Your Mind Over To Your Heart
8. No Music In My Soul
9. Waiting To Meet You
10. I Never Really Cried For You
11. Outro Instrumental