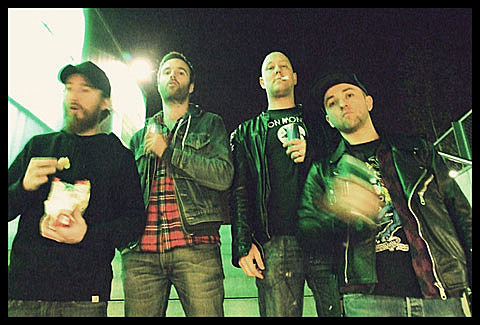 Nihilism and destruction is king for Belgium's Blind To Faith (members of Rise & Fall, Reproach, and Amenra), and the band made quite the impression with their Holy Terror stunner The Seven Fat Years Are Over. The LP, which is now available for FREE download (above), may lie somewhere in the grey area between crusty d-beat, Celtic Frost, and modern hardcore, but more importantly it's a killer record. Now the crew will take their fury and downtuned riffs to a split with the mighty Gehenna for a new release on A389 Records. Pre-order that 7", and dig on the Blind To Faith contraction "R.J." available above.

Blind To Faith currently have only one tour date to speak of. That's at the Incubate Festival in Tilburg, NL in September:

Incubate is the annual celebration of independent culture. Expect a diverse view on indie culture as a whole, including music, contemporary dance, film and visual arts. We bring more than 200 cutting edge artists in an intimate context to an international audience. Black metal next to free jazz. Street art next to academic dance.

And all over the map it is, with a diverse selection of bands including Dan Deacon (seriously), Liturgy, Zola Jesus, Final (aka Justin Broadrick), The Bomb Squad, Black Mountain, The Fresh & Onlys, and tons more. For more on the fest, including the full lineup, head to the Incubate site.

Meanwhile, Blind To Faith's labelmates and California hardcore monsters The Love Below are hitting the road for a string of US shows with the great Judas. Those shows include a date at Acheron on August 13th with the kick ass Pollution and the similarly brutal Megasus (mem of Lightning Bolt, who we profiled last year), part of a BrooklynVegan/1000Knives production!

Judas's last release was the Dictator 7", out now on RSR. Download that above, highly recommended. The Love Below has a recent release as well, the Reproductive Rights 7", available now at A389 or one of your favorite distros. Pollution's new ®SMUT 12" is a ripper, and it's out now. Ryan of Pollution will play the day before at The Charleston with his band Unearthly Trance when they team up with the great Coffinworm as well as Archon and Syphilitic Lust.

Full tour dates for The Love Below / Judas trek, along with some videos, are below.

Blind To Faith "Feast Upon" 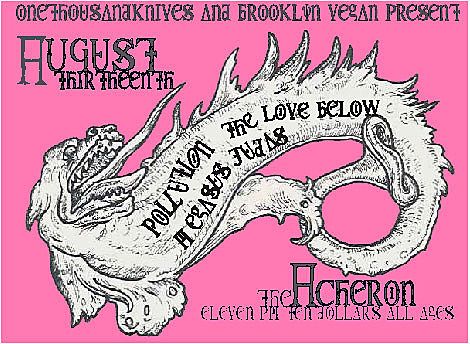